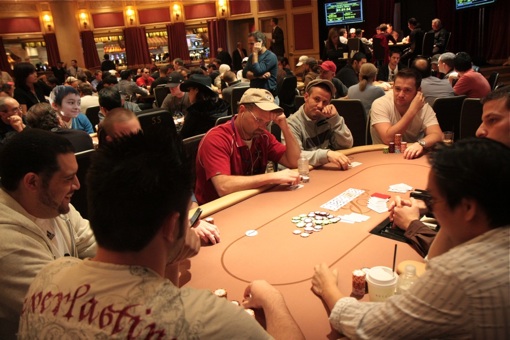 The WPT Festa al Lago has an interesting registration and blind structure that had many in the room like, wtf...

This year’s WPT Festa al Lago took a different approach then most major tournaments. Instead of splitting the field into two Day 1’s, they decided to allow registration through about half of Day 2. You could register at any point up until the Day 2 cut-off and get the same 60,000 starting stack (so you’re not blinded off). As BJ Nemeth wrote in his tourney recap:

“In retrospect, more than half the field would have been better off starting on Day 2 — only 48% of the field managed to build up a chip stack higher than they started with.”

We further agree with that assessment, as among those planning on starting on Day 2 is Andy Bloch, and you know he spent a week developing theorems and algorithms on when the optimum time to register for such a tournament structure would be. Let’s just put it like this, if we played professionally, and there was a tournament with a structure like the Festa al Lago, we’d let Bloch do all of the homework, call him up the day before the event begins, and be like, “Andy, buddy, pal, when do you think you’re registering…” (it’s just like high school).