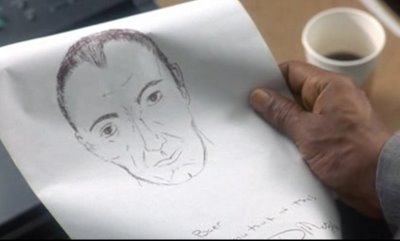 Isildur1 (artist rendition above) probably wants to light himself on fire after his session with Brian Hastings.

We usually don’t care/follow too much what’s going on in high stakes online poker drama. At the end of the day there’s a couple of guys that consistently win all of the money and everybody else just pushes it around, being anywhere from broke to rich on a daily basis.

But this Isildur1 character and the nosebleed action going on at Full Tilt right now is fascinating.

After busting off $5M of Tom durrrr Dwan‘s bankroll, Isuldur1 went bust himself. Then Isuldur1 built his stack back up, then yesterday lost $4.2M in one session to Brian Hastings, who we didn’t even know played mega-high stakes, and should pretty much cash out and move to some island without Internet access riiiiiight…now.

Just sick. Now Hastings is the big winner overall against Isildur, with Phil Ivey, Patrik Antonius, and Brian Townsend all up over a milli.

Read all about the latest bloodbath here.