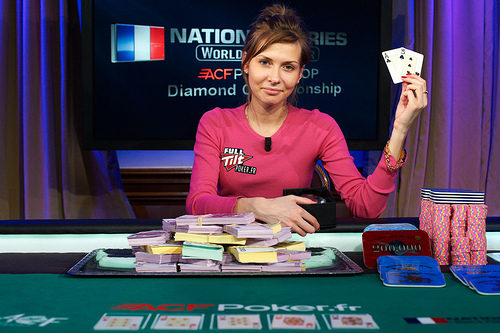 Natalia Nikitina, a woman, has done what no woman before here has done: win a WPT open event.

Since the World Poker Tour formed all the way back in 1921, there had never been a female open event winner. Ever. Not even once.

That all changed this week, as Natalia Nikitina, a woman, won the WPT Paris event. Of course the first WPT female event winner would happen in France. File that under least shocking news ever.

For the win, Natalia Nikitina, who may or many not be fantastically attractive, banks €243,830.

Natalia Nikitina, whose name leads us to believe she may or may not be a sexy Russian spy who often wears outfits similar to the one Angelina Jolie wore in that one scene in that movie she did with Brad Pitt, has one other smallish cash at an EPT event prior to her big win.

The WPT Paris event drew 188 players. Sam Trickett, who is second only to Erik Seidel for “guys who are pwning 2011,” made the final table and finished sixth for €43,545.

* Images of Natalia Nikitina courtesy of the PartyPoker blog.

LAME UPDATE: Apparently Natasha Nikitina isn’t the first WPT open event winner. This was a “regional” event and doesn’t count towards WPT Player of the Year. Whatever. She’s still a winner in our book.