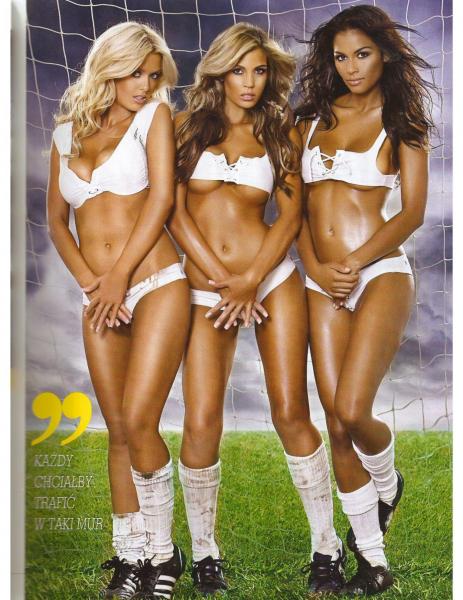 Maybe the CMK Poland models will be a good luck charm in helping some women score a bracelet today.

As noted here, The Entities who comprise Wicked Chops Poker formed their initial bond over meth, hookers, and the painfully joyous feeling of cutting themselves soccer.

Add our photog, Gluten-Free Charles (a Brit footie fan) to the mix, and we’re all about the World Cup right now, so to paraphrase Cube, today was a good day.

Amazingly, Poland produces some unbelievable hot girls (see: NAPT hostess Joanna Krupa). So in honor of the USA group win today, above and below are pics of CKM Poland models getting dirty with balls. Hopefully one day, MLS teams will realize that photoshoots like this = good marketing.

:: FOWCP Andrew Feldman on Phil Ivey‘s latest win + a debate on if he can get to 13 bracelets before Phil Hellmuth. [link]

:: NHL Awards are in Vegas today, so here is a list of the top past and present hockey WAGs. [link]

:: Jay Greenspan pens an op-ed for Pokerati revealing secrets of the WSOP. [link]

:: We’ve been laying off the gingers (although we may post a good gallery today), but here’s the hypothesis on the “ginger effect.” [link]

:: Here’s a chance to win a trip to Lollapoolza including backstage passes. [link]

:: New Zealand courts rule that poker tournaments are not gambling. 1 country down, 194 to go. [link]

:: New season of Entourage starts this weekend (with Antonio Esfandiari making a cameo), so here’s a list of the 100 hottest women who have appeared on the show. [link]

:: UFC 116 is around the corner, but Brock Lesnar is more focused on talking shit about Fedor. Hopefully they fight by UFC 200. [link]

:: Andrew is still not the father. [link]

:: And of course, World Cup news at Soccerati. [link]