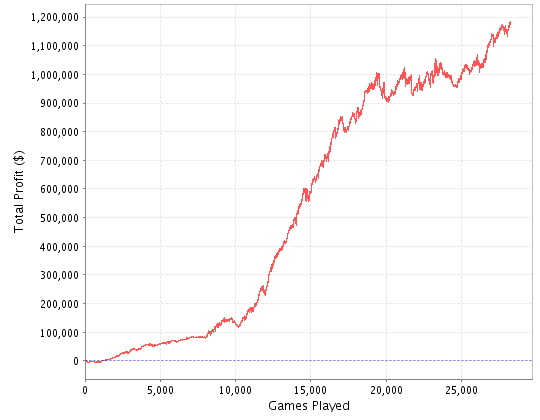 This is Olivier (livb112) Busquet's Sharkscope chart from playing HU on Tilt. So it really shouldn't be that big of a surprise that he overcame a 20-to-1 chip deficit heads-up to beat Jeremy Brown. Pretty sick.

In what some in the so-called poker “media” are calling the “greatest WPT comeback ever,” online pro Olivier Busquet overcame a 20-to-1 chip deficit heads-up against Jeremy Brown (29,075,000 to 1,530,000 to be exact) to win the WPT Borgata Poker Open.

We’re not sure where Brown’s defeat ranks in the annals of epic collapses–we’ll leave that for people who write history books hundreds of years from now to figure out–but let’s just say that somewhere today Mitch Williams, Mark Wohlers, the 1993 Houston Oilers, the 2006 Northwestern football team, and the much hyped and critically acclaimed but seldom watched and short-lived Lisa Kudrow HBO show The Comeback are smiling today.