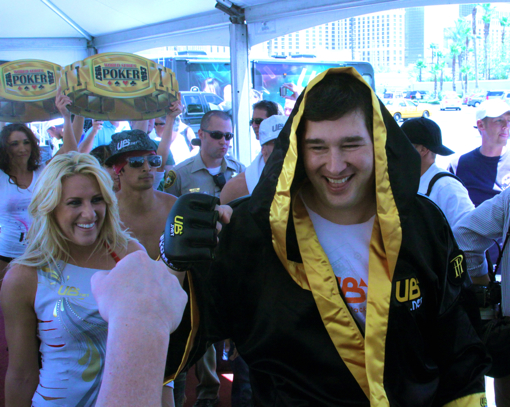 So what logo will Phil Hellmuth be wearing during next year's WSOP entrance?

In a move that surprises no one, Phil Hellmuth and UB have announced they are parting ways today.

In a move that surprises some, Annie Duke has announced she’s leaving UB as well.

The timing of the announcements today obviously aren’t a coincidence. UB has a history for releasing big news during dead press times (Exhibit A: super-user list on 9/11), and this is something that must’ve been in the works for awhile between the parties.

Having said that, this feels like a win-win-win for everyone involved. For UB to effectively move from the past, cutting ties with Hellmuth and Duke (and of course, Excapsa) was a must.

And for Hellmuth and Duke to shake the dirt off their shoulders from the UltimateBet super-user scandal and rebuild their reps, leaving UB was a must as well.

UB is moving in a different direction with their team and marketing efforts, building up more of a youth-orientated squad headlined by Eric Baldwin, Adam “Roothlus” Levy, and Maria Ho. We expect this trend and complete remodeling of the team to continue in the near future.

What’s next for Hellmuth and Duke? That’s not as obvious. Although one person who has to be happy about this is Hellmuth’s agent, Brian Balsbaugh at Poker Royalty. Love him or hate him, Hellmuth is the biggest needle mover on TV for poker. A deal with any number of sites (U.S. or non-U.S. facing)– or perhaps some new venture– feels almost inevitable for Hellmuth. The only question is how fast will he be scooped?

Also, if Hellmuth actually does land on Dancing with the Stars and manages to last a few weeks, that would absolutely broaden his appeal to other poker–or more mainstream–sponsors as well.

As for Duke, she’s done a great job positioning herself for more mainstream opportunities, and we could see her expanding past the traditional online poker sponsorship opportunities.

Anyway, it should be an interesting few months for Hellmuth, Duke, and UB.

Expect a podcast with Team UB member Joe Sebok about all of the changes later tonight or tomorrow. We will try to land a podcast with Hellmuth, or his agent Brian Balsbaugh, early next week.