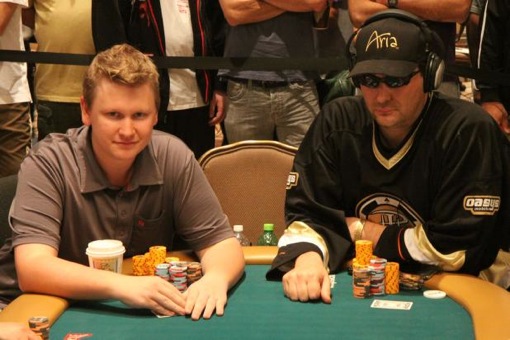 Fittingly, the 2011 WSOP Player of the Year race may be determined by Ben Lamb and Phil Hellmuth at the $50k Players Championship final table.

Tuesday at the 2011 WSOP almost had a pre-UIGEA buzz. The Amazon Room (and Pavillion) were packed. There was a lot of energy and anticipation as the Main Event was nearing (and yet another $1,500 field popped a big entrant number). And a massive rail started forming by the $50,000 Poker Players Championship, as Phil Hellmuth is making another run at bracelet #12.

Going into the money bubble, Hellmuth was on life-support as one of the smaller stacks. But he rebounded after the bubble burst (Robert Mizrachi being the bubble boy), and the Poker Brat ended the day fifth in chips with 2,245,000.

So the remaining nine are fittingly and for the most part a “who’s who” of who’s running hot right now. Brian Rast, Owais Ahmed, and Ben Lamb have won bracelets this year. Hellmuth (with two) and George Lind have runner-up finishes this year. And Scott Seiver has three cashes and a WPT Championship in May to his credit.

We’re not going to do the math math math, but there are 2011 WSOP Player of the Year implications for this event as well, with Lamb in first and Hellmuth in fourth. We’d imagine it’d take an early exit from Lamb and a win from Hellmuth to alter the rankings, but again, fuck numbers.

Follow the action at 3pm PT on WSOP.com here.

Finally, how much would a Hellmuth victory (and his general performance at this year’s WSOP) change your historical perspective of him as a player? Weigh in in the Comments section.