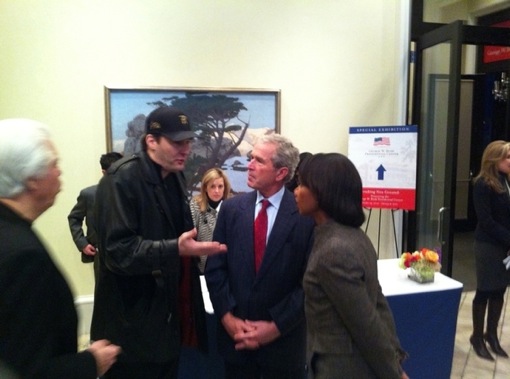 I can dodge bullets, Condi.

Well, normally we would’ve offered a “Caption This” contest to the above pic, but Tony G beat us to the punch. Well played, Mr. G.

According to Twitter (aka – The New AP), Phil Hellmuth spent some quality time with ex-prez George W. Bush, Condoleezza Rice, and Hilary Swank (wonder if he thought she was hot or not?) this weekend.

Bush even pocketed a copy of Hellmuth’s book.

WOW! Gave George Bush a signed book + signed beer can at his library at SMU + we hit it off really well! Found him to be witty + engaging…

While this probably goes against popular opinion, Hellmuth is actually one of our favorite Twitterers and should be included for voting on whatever iteration of the Twitter award Bluff goes with for next year’s Reader’s Choice. If there was a Twitter counterpart to @humblebrag called, say, @unhumblebrag, Hellmuth would be the most retweeted dude out there. But it’s all good stuff.