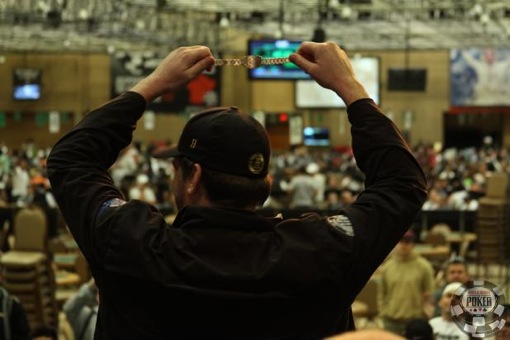 Phil Hellmuth is one persistent motherfucker.

Yes, all poker players are competitive. They all want to win bracelets. But Phil Hellmuth values his entire legacy by his bracelets. So it stung pretty hard when in 2011, Hellmuth finished second at the WSOP not once, not twice, but thrice. Ouch.

This year, luck would be a little more on his side.

Phil Hellmuth captured his record-breaking 12th bracelet in Event #18 ($2,500 Razz). This is Hellmuth’s first bracelet in a non-Hold’em event. The win gives Hellmuth some safe cushion between himself and his next two closest competitors, Doyle Brunson and Johnny Chan (both with 10 bracelets each).

And Hellmuth’s 12th came on a night when the man many expect to pass his record one day, Phil Ivey, finished second in his pursuit for bracelet #9. While Hellmuth was closing out Event #18, Ivey let Event #17 ($10,000 PLH) slip through his fingers. Holding the chip lead at various stages once play got to four-handed, Ivey succumbed to Andy Frankenberger heads-up. This makes Frankenbuger’s second bracelet in two years.