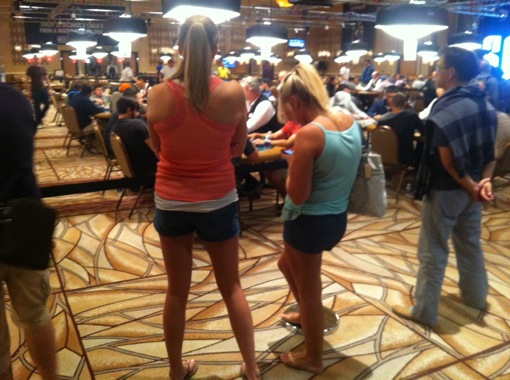 Thanks to a FOWCP with a camera phone for our first Girls on the Rail pic of the year.

Like a blue whale, or Dwyte Pilgrim’s cock, yesterday, which came to be known as Big MondayTM in WSOP circles, was definitely big.

While the winners of each event yesterday might not have been the best “storyline,” the Rio was definitely charged with the most energy we’ve seen in awhile* had we actually been there. Here’s what you/we missed:

:: Event #31 ($1,500 NLH) – For a $1,500 large-person-fieldament, this one had a helluva final table. Cherish Andrews, a woman, continued the sort of Year of the Woman thing going on, finishing fourth for $210,083. Heads-up came between two former online stars, Carter Phillips and 2009 WSOP ME champ Joe Cada. Phillips was able to hold on, banking $664,130. Cada scored $412,424 for second. Two WCP favs, the man the myth the legend, Black Phil Ivey, Big Sldick, the one and only Dwyte Pilgrim and the spectacularly-breasted JC Tran finished 11th and 12th, respectively. Get full results here.

* The Ivey/Hellmuth separate final table day was probably bigger but we weren’t there for that one either.