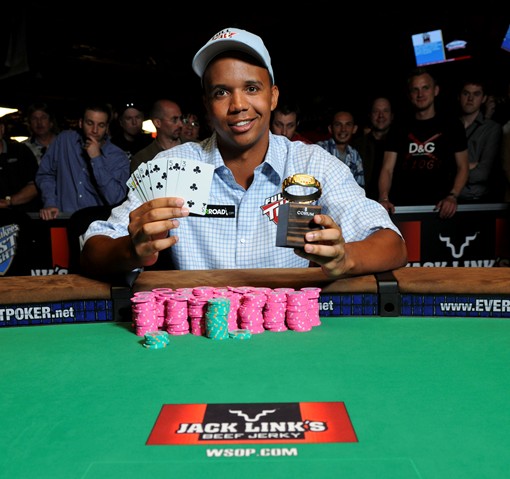 Phil Ivey has potentially millions and millions of reasons to be smiling right now.

Phil Ivey has won his second bracelet  of the 2009 WSOP.

Cementing why we dubbed the 2009 WSOP as The Year of the BrotherTM last week on Poker Road Radio, Ivey captured Event #25 ($2,500 Omaha/7CS 8B) for his seventh gold bracelet. For the win, Ivey banked $220,538. However, his overall take is rumored to be signficantly higher.

When Ivey won Event #8, he banked just over $98,000 for the win. But his overall take was reported to be as high as $12M. We later learned the real take was as low as $2.3M (buy-outs were negotiated) with a ceiling of $6M. It’s been rumored that Ivey had upped the ante on his bracelet bets with some pros after that first win. So it’s possibly that Ivey might’ve just wrecked the poker economyTM when he captured his second bracelet last night. Looks like some pros will have tabs they’ll be working down for the next decade or so.

The win also vaulted Ivey to second in the 2009 WSOP Player of the Year race, just 35 points behind Villie Wahlbeck.