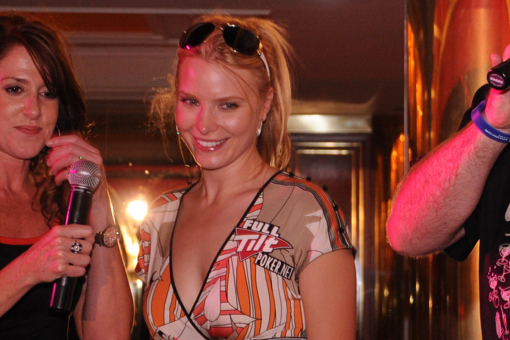 David Benyamine in the news = pictures of Erica Schoenberg. So keep it up, Mr. B.

Not sure what’s going on here, but Phil Laak went back-to-backTM over the weekend, winning the first two heats, whatever that means, of the PartyPoker Premier League IV.

Laak banked another $32,000 for the win, meaning this weekend he like quintupled his career earnings.

The third heatTM of the PPPL4TM was won by David Benyamine, who like Laak greatly out-kicked his coverage in the girl department back when he was with Erica Schoenberg.

Overall, Laak leads everyone in points, which apparently you accumulate en route to eventually being the winner?

We might have to go to the M Resort in Las Vegas on Tuesday to investigate what the hell this whole PPPL4TM thing is.

In the meantime, try to make sense of it all here.