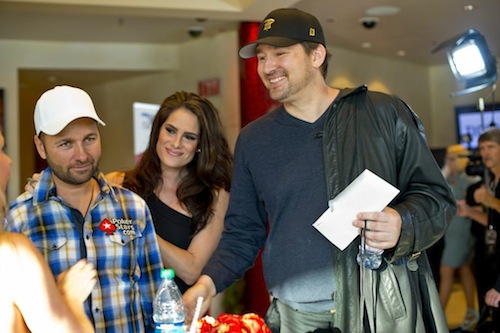 Editor’s Note: The following post is an excerpt from an upcoming column in BLUFF Magazine.There’s been a lot of chatter lately about poker needing more ambassadors (see here and here and here and here). We’ve been saying for awhile how the 20-something math whizzes are–for the most part–killing the growth of the game to the masses. Beating it into the ground. Whether you agree or not, it’s a worthy dialogue as the U.S. continues its online poker regulatory push.

Our non-poker friends who kind of know poker know a handful of names: Daniel Negreanu (or “that skinny guy who talks a lot”), Phil Hellmuth (or “that asshole”), Doyle Brunson (or “the old guy with the cowboy hat”), Phil Ivey (or “that black guy”), Antonio Esfandiari (or “the Magician guy”), Chris Moneymaker (or “Moneymaker”), or The Maven (kidding, though we like The Maven).

That’s it. That’s the short-list. Previous BLUFF POYs like Marvin Rettenmaier, Sorel Mizzi, and Chad Brown, all great players in their own right, could go streaking down Times Square and nobody would know the difference.

It’s the same faces over and over winning tournaments—young, 20-something guys who look, dress, act, and talk the same. It’s like Eminem performing “The Real Slim Shady” at the 2000 VMAs with a bunch of clones. They’re all the same guy.

They’re boring as shit. And they don’t really care that you think they’re boring. As Negreanu puts it in the above linked video, they don’t see doing interviews and making an effort to be better on TV at +EV. They’re not out-reaching to fans. It is what it is.

And it’s a shame—because many of these 20-somethings are BRILLIANT players. They should be celebrated. But they’re boring.

As Jules Winnfield once said, “I wouldn’t go so far as to call a dog filthy but they’re definitely dirty. But, a dog’s got personality. Personality goes a long way.”

Poker has a personality void on its hand and it is killing the popularity of the game and its ability to grow.  Poker NEEDS guys like Daniel Negreanu to keep themselves relevant, on TV, and selling the game to the masses.

Every “sports” top stars drive ratings and broader interest and growth in the game.

In this regard, think of poker like golf. It’s a singular sport where you compete against a field of people in a tournament. When Tiger Woods or maybe Phil Mickelson isn’t in contention on Sunday, do you tune in? Probably not. But when a Tiger Woods is on top of his game and has sustained success, ratings soar, golf clubs sell, golf courses fill up with tee times.

Poker is no different.

Look no further than WSOP ratings from around 2008 and 2009 to now. In 2008, you had Dennis Phillips, a bit of a phony, but someone the core poker TV audience (older white men) could adamantly relate to. In 2009, you had a double-whammy of Darvin Moon (common man) and Phil Ivey (marquee pro). Ratings were stellar.

In later years, when the main participants were mostly [fill in blank with random young 20’s smart white guy], the audience couldn’t relate or become engaged. They tune out. The WSOP kind of realized this and began catering the show to the 2+2 crowd. It’s a much smarter broadcast today than it was 5 years ago. It appeals to the niche of player that is now represented on the show. But for a mass audience, it’s boring.

Poker is a niche of a niche. It’s like bowling. We’ve sold poker TV spots. The poker and bowling audience demos are strikingly similar. According to the advertising research we’ve seen, it’s the same cross-section of people. It is a MASS audience. It’s the Average Joe home game player.

And do you know what the Average Joe homegame player does not read? 2+2.

Those Average Joes are the sweet spot. They want to be entertained. The virtues of discussing 3-bet merges (if that’s even what it’s called) doesn’t move their needle.

The skinny talkative guy, the asshole, the old guy with the cowboy hat, the black guy, the Magician and Moneymaker do.

Poker needs those guys to step up and succeed. They need to fill the personality void.

Read the rest of the column in the upcoming BLUFF Magazine.