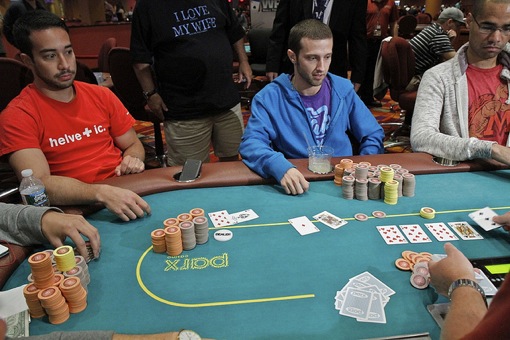 Nyffeller (left), Reynolds (center), and Gregg (right) will all battle it out for their first WPT title. Gregg will win though.

We used to be good at predictions.

Or at least said we were.

With that in mind, we’ll throw it out there–Tony Gregg will win the WPT Parx Open Poker Classic.

The mostly unheralded Gregg has racked up nearly $2.4M in live earnings over his career, including over $600k this year. He’s been at or near the chip lead the entire tournament. He’ll take the second biggest stack to the final table Wednesday, with 3,600,000.

Gregg, who has Michael Phelps in his corner, only trails Stephen Reynolds, who is stacked at 4,035,000.

Friends and family final table after that, unless you’re a fan of Andre Nyffeler (fifth – 895,000).