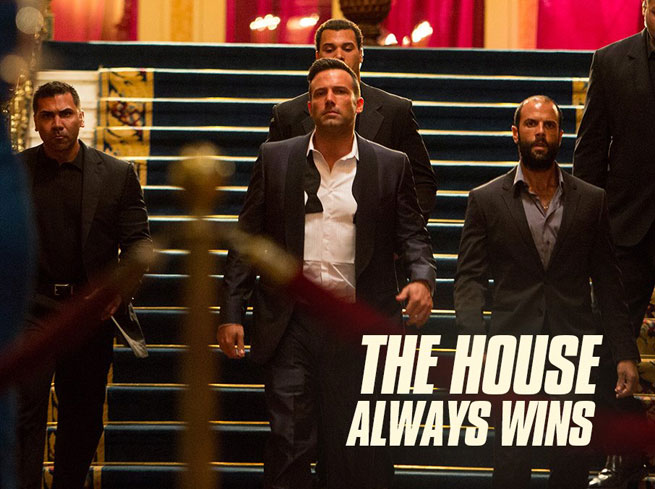 The house may always win…but this movie doesn’t.

To date, there have been two major movies that have captured poker with an authenticity that resonates with actual players of the game. The Cincinnati Kid is a little dated today, but the cast is superb, and its glimpse of an underground gambling culture in the Midwest feels genuine. The screenwriter, the great Ring Lardner, knew poker and it showed. When Edward G. Robinson says with resignation on 7th street, “Compulsory call, kid,” we know what he meant—we just call it a crying call today.

The language and culture of the game were showcased with even greater appreciation in Rounders. The writers, Brian Koppelman and David Levine, did their research. In the opening, Mike McD has thousands of dollars in his desk and Sklansky on his shelf. The underground card clubs were populated with grinders and degenerates and dreamers. They all spoke the American Poker dialect, with its all its impenetrable shorthand and quirky poetry.

Koppelman and Levine spent time among us – it’s the only way they could have gotten so much right. So we were happy to forgive any of the movie’s shortcomings.

Moreover, we were thrilled to see the writing team become true Hollywood A-listers, penning scripts directed by Stephen Soderberg and adapting a Grisham novel. We were optimistic when we heard they were returning to poker—giving an updated view, centered on the modern age of online gaming.

Sadly, the result is an unredeemable mess. And while I’m sure that Koppelman and Levine saw some of their best ideas butchered in the course of production, no one is blameless in a work as incoherent and amateurish as Runner Runner.

Justin Timberlake plays Richie Furst (just call him Rafe, already), a Finance MBA student at Princeton. He’s back in school because his hedge fund collapsed, and he’s making ends meet by playing online poker and operating as an affiliate. One night, for reasons that make very little sense, he puts his whole bankroll at risk with the hope of winning all he needs to fund his degree. But he’s cheated, UB-super-user style. And with the help of math-y friends, he puts together the proof.

The language of modern poker is put to work here, but neither the writers nor Timberlake can find any poetry in it. “Standard deviation,” “minus three sigma”, “variance,” and other terms are littered throughout the dialogue. The character sounds like a desperate job candidate, sprinkling his sentences with terms he hopes will impress.

To get his money back, Furst goes to an affiliate convention in Costa Rica, with the hope of meeting the owner of the site where he was cheated. He gets the meeting with Ivan Bloch (just call him Andy), already, played by future Batman, Ben Affleck. And soon he’s working for Bloch, running the entire operation.

It’s hard to communicate how soulless and flat the movie is to this point. Timberlake exudes charisma in roles where that’s required—he was a force in The Social Network. But here he’s tasked with actual acting—and that seems to be beyond him. He doesn’t seem to have any sense of his character; most of the time he’s just reading lines with a pleading tone while wearing a slightly befuddled expression.

But at least Timberlake is trying. Affleck is clearly disinterested. For this film to have worked at all, Bloch would need to come across as powerful and magnetic at first. Then, as the plot develops, you learn that his charms are coupled with a ruthlessness that borders on psychopathy. It’s a cliché of a character, for sure, but one that had the potential to be entertaining if Affleck had any interest. As Chops pointed out, this is especially shocking since Affleck experienced some UB-shenanigans up close and personal, and was a frequent, albeit it anonymous, user of the site.

The rest of the movie makes almost no sense. A plot is afoot; Bloch is out to set Furst up and have him take the fall for the Full Tilt-esque crimes he’s been committing. Officials are bribed, Latina beauties are paraded about, and an FBI agent yells. Someone disappears and that seems to be very significant, but then he appears again, seemingly none the worse for wear. He beds Gemma Arterton, who plays a character without a single defining characteristic or purpose in the plot, though she looks great in a tight dress.

Furst counter-plots, dispensing bribes of his own. We know what the outcome is going to be – Furst is going out-scheme and take down his evil boss. But we don’t know how exactly. And that’s where the fun and intrigue is supposed to be. By the time Bloch is pulled into custody, we’ve lost all interest in the characters or their machinations. Attempting to follow the competing schemes is unbearably tedious.

There are tidbits in Runner Runner for the online poker demographic. We’ll recognize that Koppelman and Levine have again done their research. They seem to understand the various crimes committed by operators. It’s fun to name-check Furst and Bloch. I’d wager that there will never another film in which affliate marketing is so central to the plot.

But familiarity doesn’t come across as appreciation in Runner Runner. I don’t get the sense that the creators like Furst and his stat-driven cohort nearly as much as they liked Rounder’s McDermont and his degenerate peers. Without that love of language, character, and place, we’re left to follow a silly, overworked plot.

There are good movies that could be made about online poker and its fall (or just watch the documentary, Bet, Raise, Fold). There are characters and situations that could be the centerpiece of a taught thriller. But Runner Runner captures nothing of use to the community or anyone else.

If you’re looking for some poker-related cinema, re-watch The Cincinnati Kid and forget this nonsense was ever produced.