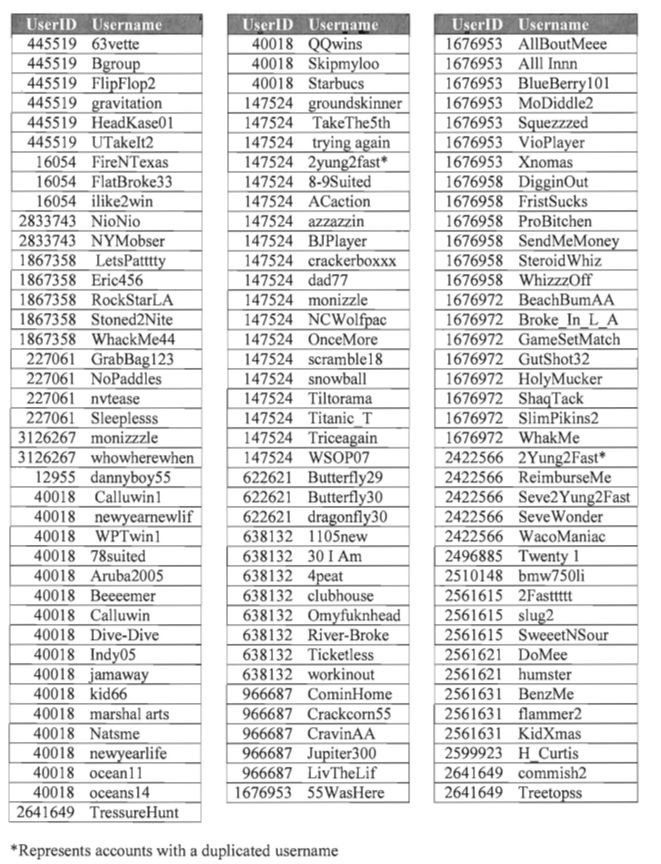 Click image to see the 117 usernames released today by the KGC in connection with the UB cheating scandal.

With that said, it should come as no surprise that the folks at the Kahnawake Gaming Commission did the latter in waiting to release its final decision with regard to the Ultimate Bet online poker cheating scandal.

The findings are the result of a year long investigation into the scamming of millions of dollars from players allegedly conducted by Russ Hamilton and others at Ultimate Bet from June 2003 up until December 2007. As a result of the investigation Ultimate Bet’s owner Tokwiro Enterprises has been forced to pay $1.5 million in fines and reimburse more than $22 million to the players affected by the cheating.

Most noteworthy from the report is that a total of 31 individuals other than Hamilton (who was already named a year ago) have been identified by the KGC as being associated with the cheating scam, and all names have been turned over to law enforcement authorities (who knows where though). The names have not been released publicly but all 117 usernames are included in the report (click post image to see them all).

Our hunch is that it won’t be long before some others are named publicly, including some known poker pros.

After the jump, some noteworthy nuggets from the 11-page document the KGC released (download PDF here):