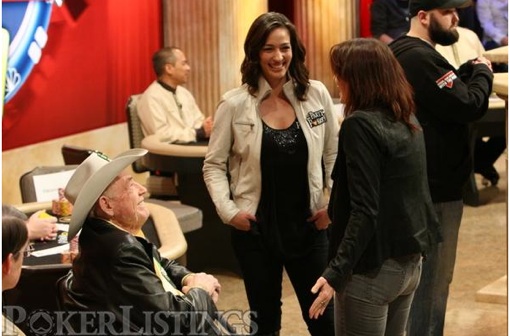 Unfortunately for us and Doyle, we won't be seeing any more of Kara Scott at the 2010 NBC National Heads-Up Poker Championship.

Not sure what’s up with this, but neither last year’s Official Pick to Win ItTM, Huck Seed, or this year’s OPTWI, Howard Lederer, will win the 2010 NBC National Heads-Up Poker Championship.

Defending champ Seed will NOT cash for the first time ever in the event, getting knocked out by Erik Seidel, who had never won a NBCHU match in five years. Lederer was defeated by Phil Hellmuth.

Go below the fold to see full Round 2 match-ups. Some highlights include: Phil Hellmuth vs. Annette Obrestad, Phil Ivey vs. Scotty Nguyen, Erick Lindgren vs. Peter Eastgate, and for some reason Darvin Moon vs. Annie Duke.