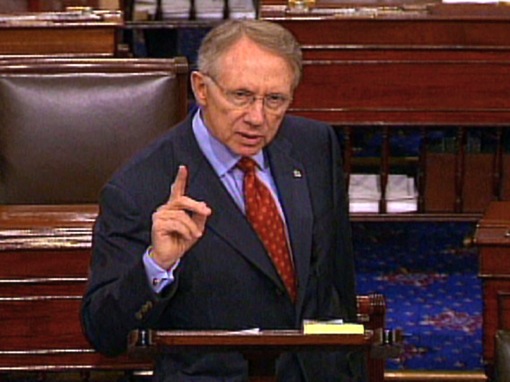 The Las Vegas Sun on Wednesday shit the bed by reporting that Senator Harry Reid (D-NV) was no longer going to pursue online poker regulation during the lame duck session.

While the so-called “industry” attempted to make sense of it all (and Las Vegas-based casinos presumably called Reid up telling him, that, you know, there are holes in that there desert…) the Sun ended up sort of admitting where they misread/misrepresented a Harry Reid quote and ran a story that basically wasn’t true.

After the Sun ran a headline stating Reid was no longer pursuing online poker regulation during the lame duck session, it sort of corrected itself with the following:

The remarks came in response to a Sun article posted online earlier in the day. In that earlier article, Reid was quoted telling the Sun after a press conference that he would not be adding legalization of online poker to his list of objectives during the lame duck session.

“We’re still working on that, we’re not able to,” Reid said in a remark captured on audio tape.

A spokesman for Reid said later that the second half of Reid’s comment was in response to a different reporter’s question. That question was not heard by other reporters and in apparently responding to it, Reid did not break eye contact with the Sun reporter.

Seems like a pretty big leap for the Sun to make, right?

So where does online poker regulation stand? Earlier in the week, the rumor was Reid was going to attach the online poker carve-out to the Bush tax cut extension on Wednesday, but that didn’t happen. Yet. Given what our sources continue to say, plus the fact that the brick & mortar casinos were largely responsible for getting Reid re-elected and they really want this (and are mostly writing the legislation), it seems like we’re dealing with degrees of “how soons” as opposed to “ifs.”

Some links to chew on overnight:

:: Stu Hoegner‘s take on the possibility of bad actors getting licensed. [link]

:: F-Train speculates if the penalty box provision has been removed from the latest Reid draft. [link]

:: Karl Rove doesn’t like this online poker carve-out one bit (and NJ is still moving ahead with their own intrastate bill). [link]

Look for our take on potential winners and losers and some things that nobody is talking about (yet) regarding the bill tomorrow.