Home   Shannon Elizabeth Can’t Be Happy About This 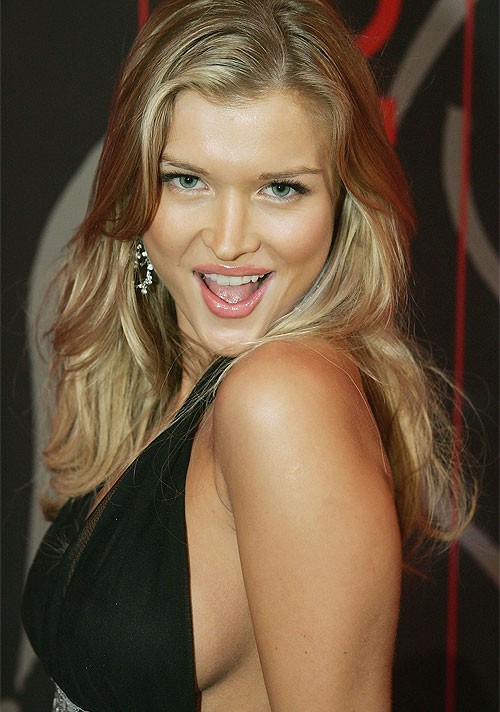 Above, the image that will haunt Shannon Elizabeth in her dreams every night for the next three months.

Dancing with the Stars announced its dance partner pairings today.

And somewhere in a shower in LA, Shannon Elizabeth is in a fetal position crying.

Joanna Krupa, who is possibly the most attractive girl we’ve ever seen in person, has been paired with Elizabeth’s boyfriend, Derek Hough. That conversation couldn’t have gone well.

[Shannon Elizabeth by laptop, Derek Hough ending cell phone call]
SE: “Who was that on the phone?”
DH: “That was the DWTS producers.” [Hough turns head to side, smiles widely, giggles]
SE: “Why did you turn your head to the side and smile and giggle after you said that?”
DH: “No reason.” [Hough turns head to side, smiles widely, giggles]
SE: “Why did you just do it again?”
DH: “Oh, uh, Mark Ballas told me this really funny joke the other day. See, a rabbi, a priest, and a gay duck walk into a bar and…”
SE: “Derek.”
DH: “Yes love.”
SE: “What did the producers tell you?”
DH: “Oh yeah. Man, I already totally forgot. Let’s see. Um. Rehearsals start next week.”
SE: “That’s good. What else?”
DH: “Hold on hold on…lemme finish the joke. The rabbi says to the bartender, I’d like a buttery nipple shot, sir…”
SE: “Derek.”
DH: “Yes love.”
SE: “What else did the producer say?”
DH: “Oh yeah that. Nothing really. You know how our producers are…ramble ramble ramble blah blah blah. [awkward pause/stare between the two] But you gotta hear this joke. So the bartender asks the priest, ‘And you, good priest?’ and the priest says, ‘A scotch aged 12 years sounds good…'”
SE: “What else did the producer say, Derek.”
DH: “I don’t know that call was so long ago now. But hold on, then the gay duck says…”
SE: “Derek!”
DH: “Hmmm…he did mention something about Joanna Krupa being my dance partner or something.”
SE: “Are you fucking kidding me.”
DH: “Why what. Who is she? I don’t even know. Is she like a Special Olympian or something? I heard this year they might have a re–”
SE: “So last season they give you Lil’ Kim, who’d fuck a rusty crowbar if given the opportunity. And now they give you Joanna Krupa? Do they hate me?”
DH: “Like I said, honey, I don’t even know who she is. Is she that old Soap Opera star from Days of our Lives whose been on the show since 1960? The one that looks like Mary Worth? Man I hope so. I want off the show as fast as I can this season to spend more time with you–”
SE: “Cut–the-shit, Derek. Cut the shit. You know who she is!!!”
[Shannon gets up, storms off]
DH: “Honey boo bear, where are you going?”
[door slams to bathroom…shower turns on…sobbing heard…Derek walks over to laptop where Shannon was.]
DH: “I didn’t know Shannon’s handle on Tilt was ‘lady marmelade.’ I thought it was ‘noataima.'”

Thank you. Thank you very much. We’ll be here all week.

UPDATE: Ok apparently Derek and Shannon split up 17 days ago. She announced it via twitter here. So let’s just say that cell phone call happened 18 days ago. And still, Shannon can’t be happy about it. Derrick, on the other hand, is the happiest motherfucker on the planet.

UPDATE IV: Ok, for those of you on the Fan Forum thread linking to us, we actually love Lil’ Kim. Sexy as hell. So that was just a joke too. We wish we were a rusty crowbar, in fact.