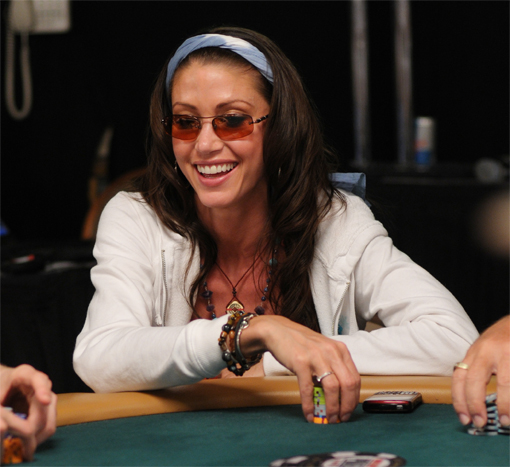 Collecting rake? Can't be true, can it?

We can’t stand Perez Hilton and don’t understand why people read his shit (especially when similar sites like this exist). He’s also been axe-grinding with Shannon Elizabeth for awhile, and the emailer to Perez sounds like he’s got an agenda (hell, it’s probably Perez emailing himself), so we’ll take the below info from his site with a grain of salt, if that’s the proper metaphor. But it’s been passed along enough to us that we gotta mention it (thanks to everyone who sent the link along).

Holy shiz, if this is true, then shame on you, Shannon Elizabeth!

A Perezcious reader just e-mailed us this crazy story regarding the z-lister!

So a few friends and I were invited to a house poker game in Los Feliz last Friday, and it turned out to be Shannon Elizabeth’s house. Her address is XXXX XXXXXXXX Way, Los Angeles. Anyways, this is kind of cool and we at first think it’s really a treat to be playing poker with her, but it turns out she’s not even playing, she’s just coming in and out and collecting money from people and taking an illegal rake for the house. One pot I was in had only $70 dollars in it, but the dealer took $25 dollars out for the house…..? Anyone who plays poker knows this is nuts.

“What the hell is there left to play for, why is it so much?” He said, “You’re in the presence of greatness,” referring to Shannon.

So my friends and I didn’t end up staying too long after that. She’s so busted apparently that she has to rip poker players off with her D-List status and rob us blind at the poker tables by raking way too much. First off, it’s illegal, second off, she’s out of her mind to think she can rake that much just because of who she was. She was just a naked girl in a popular movie. Nothing more. The few times I have played with her, she’s thrown childish hissy fits, and stormed off, throwing cards and chips. She’s mean, immature, disrespectful, and just an all around shallow greedy has-been.

Since Perez doesn’t link to other sites (ah-hem, PND), we won’t link directly to the post, but you can find it on PerezHilton.com.