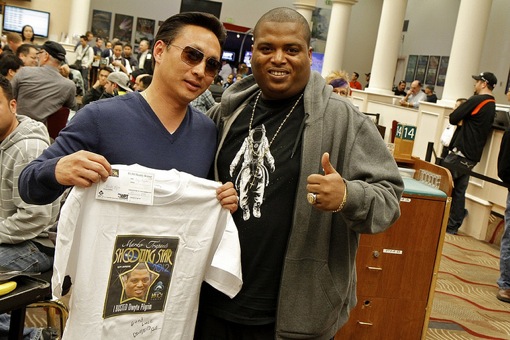 The man the myth the legend, Black Phil Ivey, Big Sldick, the one and only Dwyte Pilgrim was among the Shooting Stars eliminated on Day 1A of the WPT Bay 101.

One of the circuit’s most anticipated tour stops–the WPT Bay 101 Shooting Star–kicked off its Main Event on Monday.

The tournament designates some top pros as “Shooting Stars” and places a non-Roger-Goodell-fine-inducing $5k bounty on their heads. Additionally, the chip leader at the end of each day receives a $5k bonus.

A total of 142 players entered Day 1A with 54 surviving. Bryce Yockey finished with as chip leader with 245,300 (and earning $10k for bounty plus bonus on the day). Shannon Shorr, a guy with a girl’s name, and Venessa Selbst, a woman who likes women, were among the bigger stacks with 183,400 and 125,400 respectively.

Among the Shooting Stars eliminated included Daniel Negreanu, Phil Hellmuth, the man the myth the legend, Black Phil Ivey, Big Sldick, the one and only Dwyte Pilgrim, Maria Ho, a woman, and Liv Boeree, a woman.