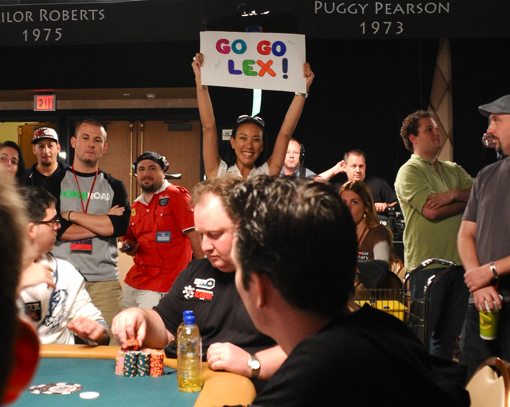 If Evy Ng‘s boyfriend Lex “RaSZI” Veldhuis doesn’t want us to refer to him as Evy Ng’s boyfriend, she isn’t necessarily helping his case today holding up that sign as she rails him on Day 3 of the $40K buy-in “40th Anniversary” event. With that said though, we have to say she’s pretty darn cute. Add her to our “Poker Players We’d Like To Cuddle” list along with Jennifer Harman, although not sure our current/first wives would approve of us cuddling with Evy like they would Harman. They can’t just become tall, leggy Asian girls over night like they can grow their hair a few inches longer.