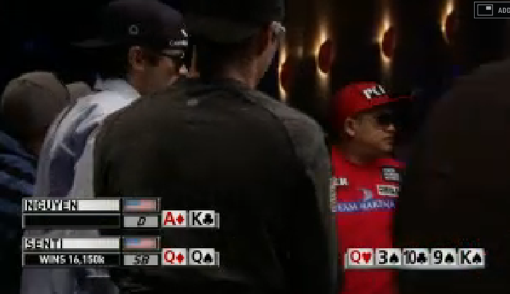 Soi Nguyen (in red) goes out in 9th courtesy of a surging Jason Senti.

Soi Nguyen was the only straight-up true “amateur” at the final table. He is also the only guy we heard of that upon making the final table acted like a late first-round NBA draft pick, buying a $200k Bentley.

Unfortunately for him, he won’t be earning any extra cash to replenish the Bentley expenditure, as he was eliminated in 9th place, banking $811,823.

In related news, Jason Senti has chipped up from short-stack status, and is now sixth overall with around 17,500,000. Michael “The Grinder” Mizrachi is fifth with around 18M, and John Racener is fourth with around 24M.

Jonathan Duhamel still maintains the chip lead with around 65.5M.