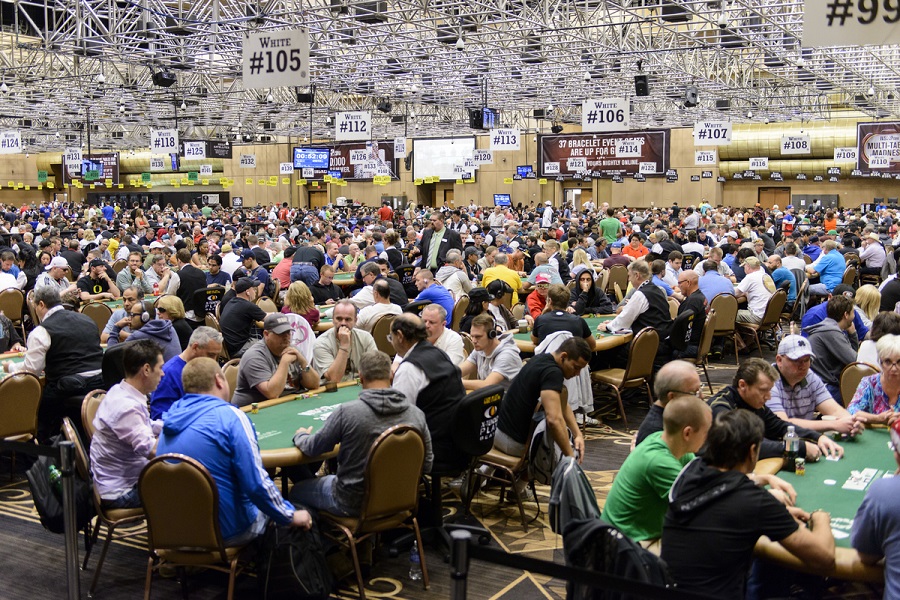 Poker is no longer a trend. Thank God. It’s a viable industry.

There are still many hurdles. We’re not putting a Pollackesque or Dreyfusonian infinitely positive spin on the state of the state. But while the industry is not all grows up yet–it has matured in tangible and meaningful ways.

From live play to legislative, broadcast to sponsorship, poker is doing just fine.

Here are five key indicators on the state of poker mid-way through 2015.

The World Series of Poker, and particularly the Main Event, have consistently acted as a barometer for the “state of the industry.” Record numbers? Poker is fine! Down year? The sky is falling!

2015 Main Event participation is down year-over-year.

This was the first WSOP that ever had over 100,000 entries.  It’s the fifth time in six years the WSOP has broken all-time entry records.

While the WSOP broadcast feels increasingly tailored to the hardcore 2+2’er, the team running the live event has done a tremendous job tailoring a series more suited to the masses. Got to give the people, give the people what they want, Jalen.

The results show. Along with the 100,000+ entries, heading into the Main Event, the most countries ever (108 and counting) were represented over the first 62 events. This is a global game that’s still growing.

The 2015 WSOP had seven events over 4,000 players (another first). It also attracted the largest PLO live tournament field ever. The daily deep stack series averages around 1,000 players—and that’s with a Deep Stack Extravaganza going on at the Venetian drawing its own big numbers.

With online poker failing to catch fire in Nevada to feed entrant pools—and with CZR being in what seems never-ended bankruptcy—the WSOP could easily devolve into a shitshow. Instead, it’s still growing. Got to give the people what they want—more poker.

2. Even With WSOP Success, Bwin May Be Winning the Summer

The Entities Who Run Bwin.Party have had a helluva summer. 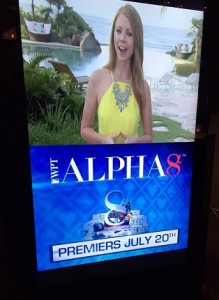 The WPT500 and Alpha8 have helped expand the WPT’s reach.

First, look at one of Bwin.Party’s newer brands, WPT500. With over 5,100 entries, the WPT500 increased 42% from last year (3,599 in 2014 if you’re into math math math). That happened while the WSOP was breaking attendance records down the street at the Rio. Like the WSOP, the WPT is thriving by creating a first class event that caters to the masses. Simple formula.

So right there, the WPT was having a good summer.

Also, while that was going on, THE WORLD POKER TOUR SOLD FOR 35 MILLION FREAKING DOLLARS.

Just over five years ago, Bwin acquired the WPT for $12.3M. The WPT lost $7.6M last year. And they just sold for $35M. Had this opportunity been presented to Mitch Garber on Dragon’s Den, he’d surely have screamed, “Sacre bleu! Ce baise fou!”

The Entities Who Comprise Wicked Chops Poker have had ties to the WPT for years. They are top notch, whip smart, diverse professionals. We couldn’t be happier for them. Clearly their new owner, the Chinese-owned OurGame, saw the value and has a plan to make that investment back. Word is that the WPT brass are very excited about this new opportunity with OurGame. The bigger picture point is this though: a poker company realizing that kind of dot-com valuation vs. actual [lack of] earnings underscores that this space, this poker space, is still hot.

On top of that, GVC Holdings and Amaya are in a bidding war with 888 to acquire the remainder of Bwin.Party assets. For around $1.39B USD. While the bid exceeds Bwin.Party’s market cap, given the multi-party interest, this isn’t too outrageous. From Amaya’s perspective, being able to integrate a sports book with its PokerStars European platform (something kicked around all the way back to the Isai days) has significant financial appeal, and the Party brand itself still has global clout.

In a U.S. market with more grey than black and white, and a global market that is experiencing more maturation than rapid expansion, the Bwin.Party valuation is a good harbinger that there is still room to grow.

If you’re looking for positive indicators for poker’s future growth potential, pay close attention to what Twitch and social poker apps are doing.

Over the past year in the poker industry, Twitch became that nerdy high school girl that removed her glasses and let her hair down. Suddenly hot, everybody wants a shot. Pioneered by Jason Somerville’s live streams, the poker audience for Twitch is blowing up. From March to mid-May this year, Somerville’s Twitch streams attracted nearly 3.8M unique viewers and over 7.2M video plays. 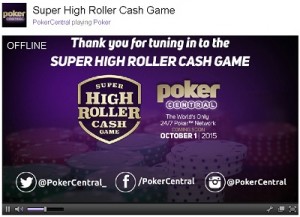 The soon-to-launch 24/7 cable network, Poker Central, launched its flagship product, the Super High Roller Bowl, last week. With only newly minted brand recognition, the Super High Roller pulled 1M+ video plays on its Twitch stream. To come out the gate with that kind of audience is almost unheard of in this space.

On the social poker / free-to-play side, while revenue has been on a decline, there are still some positive indicators. Notably, the most prominent industry brand–the WSOP–is realizing explosive growth in its social poker app. The WSOP mobile social poker app is expected to surpass Zynga users within the year.

GSN, a company with a proven track record in monetizing social games, recently acquired Fresh Deck Poker for $10M. Successful apps like DoubleDown have also expanded their poker presence and successfully driven those customers into their casino games.

The net effect is that poker as free entertainment—via massive streaming and free play products—is creating an enormous funnel for conversion to live wager and live play down the road. The future expansion of the game, in part, will come from the new audiences reached here.

Pre-Black Friday, poker was everywhere on TV. And most of that content was time-bought by the online poker sites. That’s not the case any more.

While WSOP ratings on ESPN have dipped in recent years, poker on TV is far from dead.

As we’ve written, while Day 4-7 WSOP broadcasts are slipping, November Nine WSOP ratings remain fairly strong. The sheer volume of content the WSOP creates for ESPN is immense. ESPN still gives the WSOP primetime space. Even if ESPN decides the WSOP is not a fit when their contract expires in 2017, we anticipate that there will be plenty of suitors for the programming.

Additionally, the WPT draws a weekly cume  of over 1M, still up from a few years ago. It’s partnership with FSN is as strong as ever.

Coming off two straight record years, HPT has produced more original weekly content than anyone. Their ratings that have held constant the past year on major syndicate partners (as high as .50+ in certain regions).

Even the team behind Poker Night in America has had success with its show on CBS Sports Network, which commissioned them to create even more programming. With Dustin Iannotti, Maria Ho, and David Tuchman involved, expectations are high for an original, fresh take on the poker landscape. 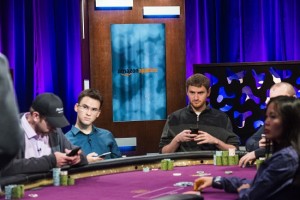 Amazon and other sponsors are flocking to new outlets like Poker Central as a means to attract desirable demographics. Photo Credit: Joe Giron

Additionally, Poker Central is well positioned for a successful fall launch. As noted, this past week they pulled off a first class event at Aria (the Super High Roller) and secured NBC Sports as a broadcast partner—the perfect launching pad for the network to gain credibility and visibility.

The continued success of poker on TV is drawing in new, non-endemic sponsors.

The Poker Central Super High Roller secured sponsorships from Dollar Shave Club and Amazon App Store, unprecedented mainstream scores for a new television product. HPT secured a deal with social giant DoubleDown Casino earlier this year. In the past year, the WSOP and WPT have run the gamut of top tier sponsors such as Ruffles, Fiat, Monster, and more.

With content platforms like Twitch drawing in millennials and skewing the poker viewing audience younger and younger, the trajectory for TV advertising dollars has never looked as promising.

And now the 800 lbs gorilla that feels like it’s moving as fast as Hodor’s deductive reasoning skills.

Nobody in the industry is happy about the pace of legislation. Despite California’s early promise this year, things have stalled as some parties can’t see eye-to-eye.

We’re not ones to ever point fingers or assess blame, but if anyone were to blame for the hold up in California, we’re sure they have sound business reasons that are perfectly aligned with their peers.

Additionally, the potential operators with a real interest in success in the state haven’t come together and used their political, communicative, and financial weight to make things happen.

And if some rabbit isn’t pulled out of the hat this year? 2017 is the next best shot.

Pennsylvania by all accounts looks more promising than California for quick passage, but that’s not a given. As rapidly as legislation has moved in the state, it is still optimistic to think a bill actually does pass this year. Next year, more likely.

In the immediate short-term, California and Pennsylvania are our Obi Wans. New York and Illinois will get on deck next, but it would be shocking to see either happen before California or Pennsylvania.

This is going to be a slog. So where is the silver lining?

While it is in the early stages, there’s legitimate interest among key operators to coalesce and work together for getting legislation passed. California and Pennsylvania are having meaningful hearings that, at a minimum, are laying the groundwork for a smoother passage tract when all parties do get on the same page.

Additionally, functional issues such as geo-location and general security concerns are now generally accepted as safe and sound.

The impediments are dwindling. As to exactly how much longer we have to wait, well, you know.

Momentum is slowly building. Momentum begets momentum. Inch by inch poker finds itself in a better place than it was in the previous year, and in the year before that. Most key indicators, from company valuations to overall content consumption, are pointing up.

A Moneymaker-esque lightning-in-a-bottle moment to propel the game forward again isn’t likely. Building a viable and vibrant industry, with smart people and real processes and procedures, is. The state of the industry has never been better.