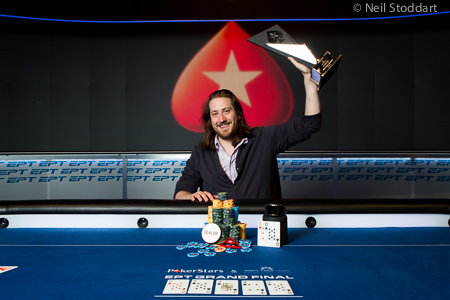 This win can pay for a lotta grilled cheese sandwiches.

Sure, Steve O’Dwyer may look like the Southern fraternity brother we had in the ’90’s who liked acid, weed, devil sticks, and Phish a liiiiiiiiiiitttttttttle too much, but fuckina he’s tearing up the poker circuit.

O’Dwyer, 31, defeated what many are calling one of the best naturally conceived final tables in modern poker history at the EPT Grand Final.

Back to O’Dwyer, check out his year-by-year stats here. It’s like he visited Adrian Peterson’s doctor and went on poker PEDs in 2011.