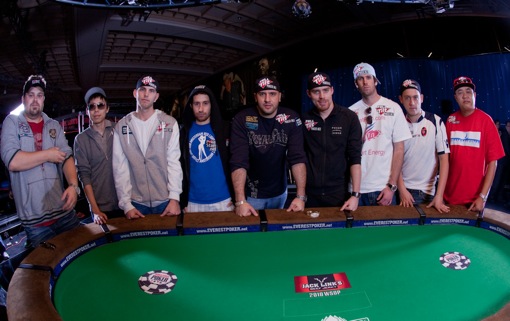 The November Nine is finally ready to play down to one.

We were there live when they played down to nine. We’ve seen the broadcasts. Time to name our picks. However, we’re not going to be stupid enough to just pick one guy. As witnessed last year, the guy who plays the best isn’t necessarily always the guy who wins. So here’s a look at our favorites, our dark horse, and the players who will need a lot of luck on their side.

:: John Dolan (starting stack: 2nd overall 46,250,000) – Dolan seems to have the respect of people we respect. He seems pretty level-headed and doesn’t make big blow-up type mistakes. With the mountain of chips he has in front of him, he’ll have room to play, speculate, and maybe get lucky.

:: John Racener (starting stack: 4th overall 19,050,000) – Racener has been grinding on the circuit since he was legal drinking age. He rarely made a misstep during his Main Event run and, while it may sound ridiculous, he really wants to win it all.

:: Michael “The Grinder” Mizrachi (starting stack: 7th overall 14,450,000) – Speaking of wanting to win it all, nobody fought harder to make the final table than Grinder. More than anyone else, Grinder knows how to close out big events. The stage won’t scare him. He usually performs his best when the pressure is on. If anyone can chip up a short-stack to a title, it’s Grinder.

:: Jason Senti (starting stack: 9th overall 7,625,000) – Many consider him the most intelligent player at the final table. While he needs to get lucky early on with a double up, if he gets some chips, he could be dangerous.

:: Jonathan Duhamel (starting stack : 1st overall 65,975,000) – Can he keep a horseshoe up his butt for four months in between play? Probably not. Yes, he has more than enough chips to endure hits, but the chip leader going in rarely is the one coming out, and Duhamel used up all of his lottery tickets getting here.

:: Joe “Subiime” Cheong (starting stack: 3rd overall 23,525,000): Nothing against him or his game. But just a gut. He said he doesn’t want to win, he wants to come in second. While we think that opinion will change once play starts, maybe he lacks the killer instinct to win the big one.

:: Soi Nguyen (starting stack: 8th overall 9,650,000) – He’s this year’s Dan Nassif. Unless he goes all Jerry Yang and out of nowhere suddenly pwns the final table. But doubtful.

That’s it for now. We’ll be at the Rio making podcasts, RawVegas.tv videos, and getting dirt if there’s any to be had.