Home   The 2011 WSOP May Have That Bad Party Feeling 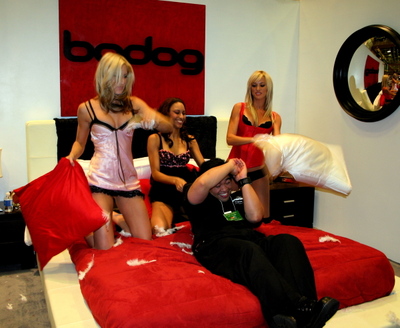 The days of Bodog girls having pillow fights at the WSOP are just a thing of the past.

Editor’s Note: The following is an excerpt from our soon-to-be-published Bluff Magazine June 2011 article. The set-up: what this year’s WSOP is going to feel like post-4/15TM. Look for the full column on news stands sometime in a few weeks.

…The 2011 WSOP (through no fault of their own) may end up feeling like a regular college party that you’ve lingered around for a few hours too long. You know that party.

Around 8pm (or in this case, 2003) a few people show up, and one or two of them are people you want at your party–the ones that make it fun and legitimate (Ivey, Moneymaker). By 10pm (2005) you can’t believe how much the party has grown. Everyone is excited about the future of the evening, life is great. By 11pm (2006) the party has peaked. Mass capacity. Tons of energy. Alcohol is flowing. In a new, extremely localized marketing campaign, Bodog even sets up a booth where hot girls are having pillow fights. College is awesome! But deep down you know you’ve hit the apex of the evening.

Then the cops show up and tell you to turn it down (2007). Neighbors are complaining. The cops are not totally going to bust up the good time yet, but it’s time to watch it. No more fuck-ups…

So the crowd temporarily thins out. But word of the party had already spread, and by 1pm it picks back up a little. New crowd, new life, new buzz. By this time everyone who was there at the start of the party is so drunk and happy, they forgot about the cops first visit. It’s been a couple of hours. Surely they’re not coming back. If they were coming back, they would’ve busted down the doors already. The music gets louder. The talking gets louder. The booze is giving everyone a false sense of confidence. Isabelle Mercier is drunkenly hooking up with Dario Minieri in the corner. Sure everyone is having a blast, but it’s not the same as it was at 11pm.

The next weekend you have the same party, but it’s just not the same. The sting of how the previous party ended brings a smaller crowd (just the hardcore party-ers). It takes awhile before the party gets back to what it once was.

The good news is the party almost always gets back to what it once was. We just hope that everyone hasn’t graduated by then.