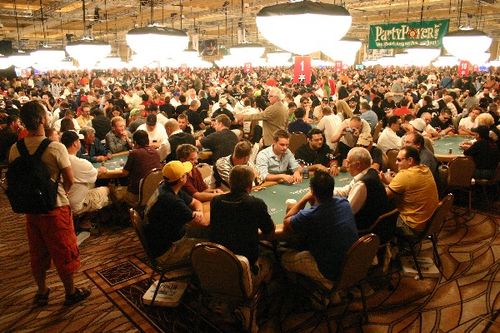 Much like the Creeper before he was unmasked, the World Series of Poker always manages to creep up on the industry every year.

Here we are. It’s May. And the first event (Casino Employees) starts today.

Last year was supposed to be the Litmus Test year for the WSOP. Why’s It Gotta Be Black Friday had just happened. Early speculation was that the Main Event went drop to Greg Raymer 2004 numbers. But after a few strong turnouts at World Poker Tour events, people remained more positive about participation prospects. In the end, the WSOP had a record breaking year.

As it turned out, the 2011 WSOP was like a last hurrah for the industry. There was still a little bit of money left in the poker economy. 2011 proved that the WSOP brand was strong, and people’s appetite to play poker (and win a bracelet) had not been diminished.

But what about this year? Here’s how we see it.

1. Turn-out Drops Mildly Across the Board – We have no idea how precipitous the fall will be. But there will be a fall. This is no knock on the WSOP, it’s just the state of the State. First, turnout is dropping in events all over the globe. It’s called a trend. Second, the overall global economy still isn’t exactly humming, and the disposable income to drop $2,000 on travel and an event just isn’t there to boost numbers.

While pre-registration numbers are up this year–we still expect to see a 10-15% drop in overall participation this year in the pre-lim events. For the Main Event, look for a 2005-ish number of around 5,600 entrants.

2. New Look Media – Last year, there was still enough cash in various war chests to send the so-called poker “media” out in full-force. This year, we expect a scaled down media presence–and a different look at coverage.

The WSOP has (finally) adopted the idea of covering their events via handheld devices. This is a proposal we had out to them two years ago. Can’t believe it took two years for someone to give it a shot. We’ll see how it goes–but in theory–if the coverage is focused more on chip counts and less on hand recounts nobody will ever read or care about, the coverage should be better overall.

Otherwise, just expect less places to get solid coverage. There’s no money in it for blogs or independents to really dedicate the required resources needed to provide unique content.

3. Fewer “Big Names” Win Events – This is just a gut–but the loss of Full Tilt Poker has created a void in players with sponsorships, which leads to a lack of buy-in and backing income. That was the lifeblood to many-a-name’s ability to enter multiple events. With that money gone, it opens the door for more who-the-fuck-is-thats to win events. Expect this year to be the Not Year of the Pro.

Expect the same this year.

The PokerStars-Tilt acquisition is still on target to happen. The devil is in the details, and it’s taking longer than some hope to announce, but as of today, it’s still on track. Once it goes through, expect the deal details, repayment plans, and relaunch plans to completely dominate the headlines.

And if something absurd happens to collapse the acquisition? Watch out.