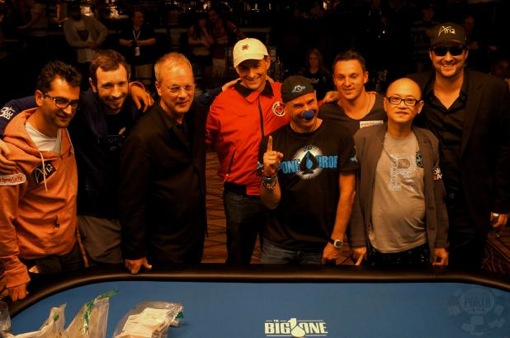 Just missing the money, finishing in 10th place, was Ilya Bulychev. He was heard uttering, “This is bulychev,” as he walked away from the table.*

Once in the money, Mike Sexton was disposed, earning himself $1,109,333. Or approximately $4 after paying off the backers who put him in.

The eight-man final table is led by Antonio Esfandiari, who is stacked at 39,925,000. He’s followed by the guy most would have to consider the favorite at this point, Sam Trickett, with 37,000,000. Event founder/organizer Guy Laliberté is third and almost finished with his quest to forever suck $18M out of the poker economy by donating his winnings to “charity” (21,700,000).

The marquee final table name is Phil Hellmuth, who continues his two-year WSOP run-good. Hellmuth is fifth overall with 10,925,00.