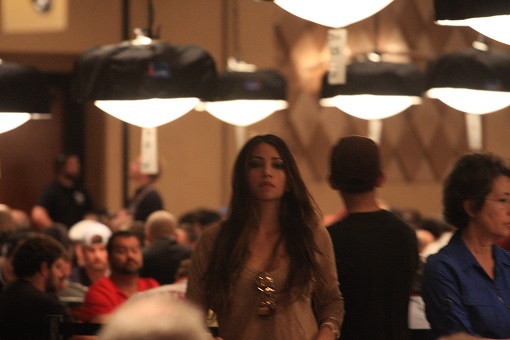 Back from Belize, it’s Badhi’s girl.

Back at the 2011 WSOP Main Event, Allen “Chainsaw” Kessler tweeted at us about a Girl on the Rail by his table.

We eventually came to find out that she was eventual N9’er Badih “Bob” Bounahra‘s girlfriend/fiance/wife/daughter/cousin. We eventually eventually found out she was his daughter, and she came to be known as the Badih HottieTM.

In semi-related news, the 2013 WSOP Main Event is at dinner break. About 980 remain. Old-timer Dick van Luijk is chip leader and the only person in the room stacked over 1M.

Phil Hellmuth was eliminated from play, just missing out on his 100th WSOP cash.