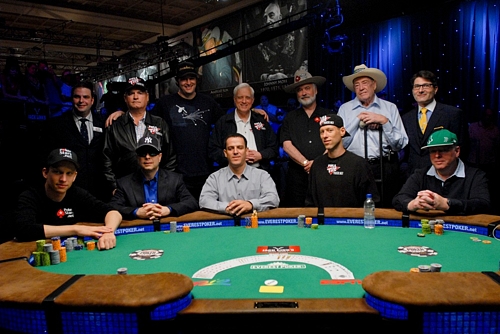 Ten of poker's all-time greats competed for the Binion Cup.

With two televised events in the bag, TPTB at ESPNare probably looking around and saying, “Hmmm…you guys want to film some more final tables this year? What do you think? Sound good? We really should, doncha think? Maybe just one more? For the heck of it?”

From a ratings perspective, the Event #2 ($40k NLH) final table definitely was lacking in the luster department. But that was OK, because surely the Champions Event would bring the fireworks, right?

Play was stopped early on Day 1 of the Champions Event once the field was whittled to 10 (instead of 9) as Phil Hellmuthwas uber-short-stacked and, this way, at least guaranteed a little TV face time for the Poker Brat.

Smart move, as he went out on the first hand of TV final table play. Doyle Brunson went out in eight. Huck Seed in sixth. Carlos Mortensen in fifth. Eventually, a “worst case scenario” situation happened in the ratings department, as the final three battling for the Binion Cup ended up being a triumvirate of cult of personalities (and general poker nits): Tom McEvoy, Robert Varkyoni, and Dan Harrington.

Unfortunately, inarguably the most interesting and accomplished of the bunch, Dan Harrington, went out in third, leaving a potential doomsday scenario of Robert Varkyoni winning the Champions Event. As we’ve always stated, Varkyoni seems like a nice enough guy. He’s represented poker with class. But there’s a reason why he was the only guy without an online sponsor patch at the final table: he’s widely considered to be one of the worst Main Event champs ever and completely unmarketable. His capturing of the Champions Event just wouldn’t have seemed right.

Fortunately (?), McEvoy ended up pulling it out, winning the Binion Cup and the 1970 Corvette Stingray.

We’ve been covering the WSOP since 2005. One thing that never made sense to us is why ESPN was so rigid on picking events to televise before the tournaments were actually played. Would it be that difficult to pick interesting final tables with personalities and storylines as they popped up? Commit to a few obvious marquee tournaments (the Main Event, $40k NLH) and pick the remaining ones as they occur?

Because from the looks of it, the TV audience, and let’s face it, it’s all about growing the TV audience, is now saddled with two fairly ho-hum final tables lacking in marquee names and general interest. In concept what ESPN did this year sounded like a good idea, and adding the Champions Event and $40k NLH tourneys was a great idea by Harrah’s, but sometimes concept and reality don’t pan out as planned. So our fingers are crossed for a strong Main Event next month.

In the meantime, go to Bluff to register for viewing of all the other 2009 WSOP final tables here.