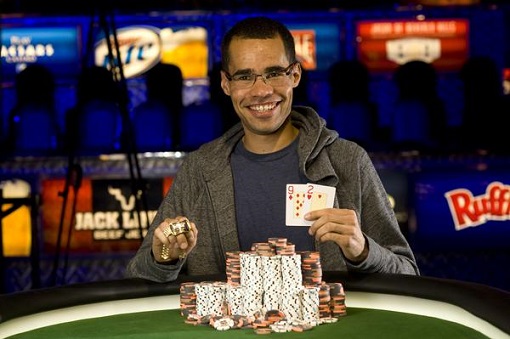 The BigOne is done.

Gregg, whose definitely got a cablanasian vibe going, isn’t necessarily well-known to the mass poker audience (until now!), but he’s absolutely well-respected among the pro circuit. One of Greg Merson’s close friends and railers, he’s got a WPT title under his belt, a PCA final table, and last month came in second at the EPT Grand Final High Roller final table. As Merch would say, “Whoo-hooo, that man is running hotter than a spit-fire canary on a hot tin roof in Mississip-ah in July.”

Very little known fact, but two years ago when we tried to figure out who Asian Spa was, Gregg was among our 10 finalists. Wasn’t him.

The $50,000 Players Championship also kicks off this afternoon. Good day of poker action. Follow that live on wsop.com.