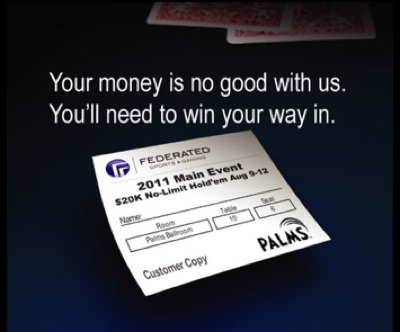 In what is either A) an all-too-clever-for-its-own-good-so-its-actually-bad attempt to reach Pro-Am players, or B) some form of subliminal messaging to its investors about their [to be determined] business [model], Federated Sports+Gaming‘s first attempt at an advertisement comes right out the gate and says: “Your money is no good with us.”

Now, we’re no ad majors,* but is it really a good idea to make the lead of your first ad, “Your money is no good with us?”

Who cares what the rest of the message says after that. Most people are going to scan the headline and match it against the image. It’s the way these things work. If the ad and image are compelling, then said people will dig deeper. If not, they move on. So about 90% of people who read this ad will take away the following: “Federated Sports+Gaming, my money isn’t good with them. Ok then.” The 9% that continue will read the, “You’ll need to win your way in” line and think to themselves, “What the fuck does that mean?” …and then walk away.

The other 1% are FS+G’s management team, who probably think it’s brilliant.

No but seriously, let’s say someone wins their way in. They still need to give FS+G their buy-in. So is the money good then or not?

Good to see FS+G hired a combo of CardPlayer‘s 2006 WSOP coverage team and the PPA to handle their communications.

Read the ad in full below the fold. 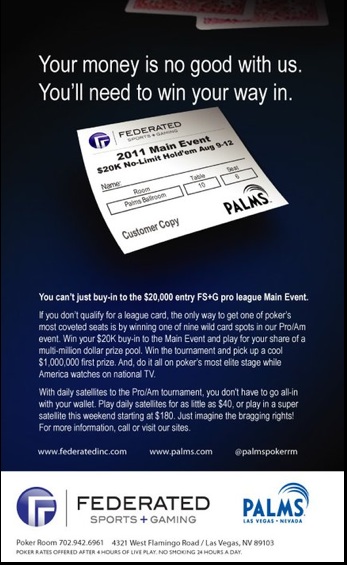