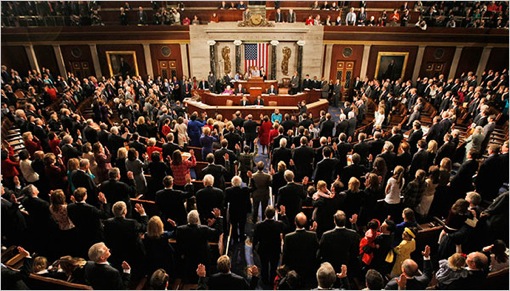 Above is a representation of what Tuesday's hearing on Internet gaming will not look like.

On Tuesday, the House of Representatives committee on Energy and Commerce will hold a subcommittee hearing titled “Internet Gaming: Is There A Safe Bet?”

We’ve received an advanced look at some of the testimony that will be presented by Alphonse D’Amato (PPA), Ernest Stevens, Jr. (National Indian Gaming Association), and others. Some thoughts on what to expect:

:: Safeguards could dramatically reshape the world we knew. Reading through the testimony, one of the things that jumped out at us, to paraphrase the Helen Lovejoy, was, “won’t somebody please think of the children?” Or better put: a major focus of this hearing will be discussing techniques to ensure underage/problem gambling will not be issues once online gaming–and specifically poker–is regulated in the U.S.

In particular, one thing we see developing as a means to curb your gambling enthusiasm: strict weekly/monthly deposit limits. We’ve heard this deposit-limit chatter within the industry all year, and it’s something to pay close attention to as the law is eventually written. If, say, strict deposit limits are put in place, forget about nosebleed action, or reloading your account quickly. As we see it, strict deposit limits/safeguards is a likely concession that may be made in order to get the more conservative/bible-beating Congressmen to OK regulation.

:: The tribes will not be denied. We’ve maintained for some time to watch that tribal interests may be big winners in a regulated online poker world. In many cases, Tribes are more liquid (and may be more aggressive in their marketing) than their Nevada-based brick & mortar competitors. The subcommittee testimony preview makes it clear that Indian tribes–after some period of divide–are united in raking profits from Internet gaming.

Back in December of last year, rumors abounded that an initial obstacle in passing the Reid BillTM was tribal opposition (first drafts did not have them on equal footing as, say, Nevada brick & mortars). That won’t be the case this time around. The Tribes have spoken. And they want in on the action.

:: Evolving facts and figures. Pinpointing what the exact amount online sites earned–and how much people wagered on them–has been an inexact science over the years (we believe all previous studies as to online gaming profits have been on the aggressive/high side). But more data is coming out and we may be getting closer to the truth. One nugget that will be put forth Tuesday: U.S. Americans wagered $16B on Internet poker in 2010. Another one: in 2010, Indian gaming (including taxes, employment, etc.) generated $13B for local, state, and federal government budgets. If that’s the case, maybe the $4B or so annually the government estimates it could generate annually off of online poker over the next 10 years is on the conservative-side.

:: Our opinion hasn’t changed–we’re a ways away. We still maintain the most likely timeframe for online poker regulation to pass through Congress is during the lame-duck month after the 2012 Presidential election/mid-terms. Nothing we’ve seen on Tuesday’s hearings changes that opinion. Getting online poker regulated is a process that is parts educational, parts PR, and parts back-room dealing. The industry will get there, and we’re getting closer, but regulation is not just around the corner… yet.