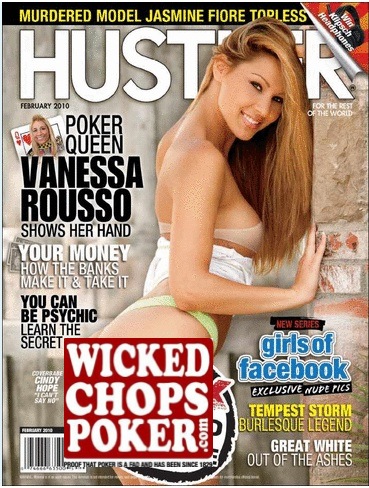 Vanessa Rousso shows her hand and only her hand in this month's Hustler Magazine.

Ok, that headline may be a bit misleading. But then again, Vanessa Rousso does appear in this month’s Hustler, she’ll just be the only girl in it with clothes on.

Rousso, who went to Duke, is featured in a poker column in the mag (or so we assume, given that we haven’t bought a Hustler since maybe 2008 1992 and there is a 0% chance we’re actually reading the article).

She also gets to share the cover with such high-class topics as “Murdered Model Jasmine Fiore Topless” (you stay classy…) and “You Can Be Psychic. Learn the Secret.”

So to recap, in under a year, Vanessa Rousso has appeared in a GoDaddy.com commercial, Sports Illustrated’s Swimsuit Issue, the final two in NBC’s National Heads-Up Poker Championship, and Hustler Magazine. If someone rattled that list off to us last December, we would’ve told them, “No effing way she finishes second at the Heads-Up Championship. Get the eff out of here!”

Oh yeah, we added that WCP graphic on the cover. A little too much ass showing there. This is a family site, after all.