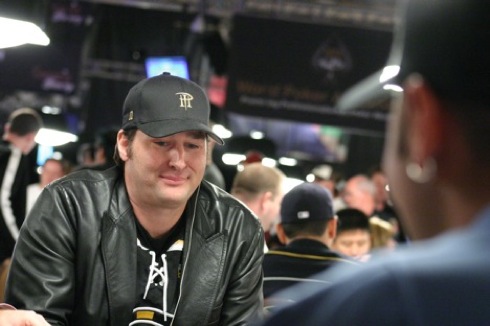 (Editor’s Note: The following column appears in the October issue of Bluff Magazine)

If you’re a longtime reader of our site or column in Bluff, you know we’re all about judging books by their cover, putting people in nice tidy little boxes, and giving everything a list or ranking.

So it only comes natural that we decided to develop the first ever Poker Q Score ranking system. Anything that can make our, and your, life easier by labeling and ranking is a good thing.

Over the past few months, we’ve paneled so-called “experts” in the industry—a mixture of players, media, agents, and fans—for their opinion on who are the 10 biggest names in poker. Through that feedback, we’ve developed poker’s version of a Q ranking. We’ll be tweaking this as time goes on (and from the sounds of it, changing the arbitrary name of it too).

Anyway, for those unfamiliar, Hollywood uses Q Scores to determine a star’s basic likability and popularity. We’ve taken that basic premise and expanded it, as poker is a little more complicated. Huge stars within the industry might be virtually unknown outside of it (think Tom Dwan), and bigger names to the mass public might ultimately not carry much weight within the industry (think Johnny Chan).

We asked our panel to judge players on the following criteria: 1) who are the most popular/likable players today, 2) who are the most well-known names to the mass public, 3) if every poker player was a free-agent with no site affiliation today, who would get the largest endorsement deal, and 4) what players are most likely to get a mainstream advertising sponsorship.

And there’s the set-up. Here are the results. Maybe some surprises, maybe not. One thing is sure: there is a clear top-tier (the first three people), then a clear second tier (the next two), and then a drop from there.

1. Daniel Negreanu: Not much of a shocker here. Daniel has been the biggest, most marketable name in the game for a few years now. He had his best year in 2004, right at the heart of the poker boom, and his notoriety never diminished from there. He’s rumored to have the biggest sponsorship deal in the industry and, along with Phil Hellmuth, commands the highest appearance fees. Having Daniel on a broadcast is a sure-fire ratings hike (which is why he’s always on WSOP Day 1 ESPN featured tables), and he’s extremely popular among fans and within the industry. Daniel is one of the few guys who actively markets himself as a brand and openly engages various media forms to promote himself, including his highly popular blogs and vlogs.

2. Phil Ivey: In many ways, Ivey is the anti-Negreanu/Hellmuth. He almost goes out of his way to not engage the media or his fans. But in doing so, he’s built up a very marketable mystique to him. As one of our pollees put it, “Everyone wants to know what goes on in his world.”

He’s also the acknowledged best player in the world—in both cash games and tournaments. From a marketers perspective, he’s got an even greater commodity going for him: people refer to him as the Tiger Woods of Poker™. In reality, he’s the only poker player you could envision in a Gillette commercial standing next to the likes of Woods and Roger Federer.

Ivey’s November Nine™ appearance definitely vaulted him up a spot, as many acknowledged it wasn’t until the WSOP Main Event wrapped that they would leapfrog him ahead of Hellmuth. If Ivey does the improbably and overcomes Darvin Moon’s huge chip advantage and wins the Main Event, he could very well catapult to the top spot on this list.

Until Annie Duke’s appearance on the Celebrity Apprentice, Hellmuth is arguably the most well-known name to the public. One of the people we surveyed summed it up well, “Everyone who’s ever seen any poker show has seen Hellmuth.”

Like major athletes, he truly markets himself as a brand. Like Negreanu (and unlike Ivey), there is a definitive ratings spike when he’s on a poker broadcast, more so than any other name in the game.

Hellmuth garners huge appearance fees and has even had his face on Milwaukee’s Best Light beer cans. But Hellmuth takes some knocks in his score for likability/popularity. While no one can take their eyes off of him, as one panelist said, “Hellmuth needs to realize that often people are more laughing AT him than WITH him. There’s a huge difference there.” However, we feel that part of Hellmuth appeal is being a heel, and he cultivates that “Poker Brat” image well. Our gut says as he eventually wins more bracelets, continues to mature and moves more into an elder statesmen role in the game, you’ll see his likability rise considerably.

4. Doyle Brunson: Along with Negreanu, Ivey, and Hellmuth, Doyle Brunson is the only other name to appear on everyone’s top 10. His respected by his peers, has a fair degree of mass public recognition, and is another television staple. Everybody loves Doyle.

5. Annie Duke: Even before her appearance on the Celebrity Apprentice, Duke was a lock to make the list. But being a finalist on one of the most talked about reality shows of the year definitely boosted overall score.

Duke will likely slide down the list over the course of the next few years, but we can’t argue with her ranking for now.

6. Scotty Nguyen: Nguyen has done a great job regaining his rep as the fun-loving Prince of Poker since his disastrous 2008 $50k H.O.R.S.E. victory. An eye-opener for us on Scotty was watching one of his Scotty Being Scotty reality vlogs on RawVegas.tv where he was literally mobbed by fans asking for his autograph while walking through (or at least trying to) the Rio Amazon Room. This went on for 10 solid minutes. And then continued as he walked through Pokerpalooza.

Nguyen also meets a high Q Score ranking by meeting other criteria: he’s appeared in a Pepsi commercial already and is the face of Swedish-based Expekt.com’s poker platform.

7. Chris Moneymaker: Bottomline, how many people in the general public aren’t familiar with the story of the Tennessee account with the unbelievable last name who turned a $39 Poker Stars satellite into a $2.5M WSOP Main Event win?

Moneymaker ushered in the poker boom. He’s still amazingly relevant. We actually think that even 10 years from now, he’ll still be on this list.

8. Vanessa Rousso: Some would argue that 2009 has been The Year of Rousso. First, she appeared in the Sports Illustrated Swimsuit Issue (albeit in a Poker Stars ad buy). Then a few days after inking and starring in a GoDaddy.com commercial with Danika Patrick, Rousso finished second on NBC’s National Heads-Up Poker Championship. Then she went on to win an EPT High Rollers event and had a decent WSOP.

As one industry-type told us, “She’s relatively attractive, really intelligent, and is becoming a great poker player.”
Even more than Annie Duke, she’s the new face of women in poker.

9. Gus Hansen: When the Travel Channel started airing the World Poker Tour, Hansen captivated the TV audience with his unorthodox style of play.

He’s a good-looking guy with a cool vibe that people get excited to see play. While we don’t see him a permanent fixture on this list, he’s got huge international appeal (he really is “huge in Europe”), which keeps him in the top 10 for now.

10. Johnny Chan: The Orient Express appears on this list in 2009 for one reason and one reason only: his appearance in the movie Rounders.

It’s amazing that someone who won back-to-back Main Events (and finished second the following year) and at the height of the poker boom was on the poker version of Mount Rushmore (along with Brunson, Hellmuth, Negreanu) is so completely irrelevant within the industry now. Chan has been a free-agent more or less for awhile now, especially since closing down his ChanPoker.net site. But he isn’t attracting any real sponsorship opportunities to speak of now.

But as one panelist put it, “Everybody knows who Johnny Chan is because of Rounders. That movie created a legend to the masses.”

And it’s true. While his lack of recent success and unlikability in the industry has caused him to lack some general luster, if you were to ask the average guy on the street, “Hey, who is that really well-known Asian poker player?” the majority of them would answer “Johnny Chan” over Scotty Nguyen or anyone else.

In reality, we could’ve just as easily put Mike Matusow or Chris “Jesus” Ferguson in the ten spot, as they showed up on way more lists, but Chan’s general awareness to the mass public puts him at 310, for now at least.