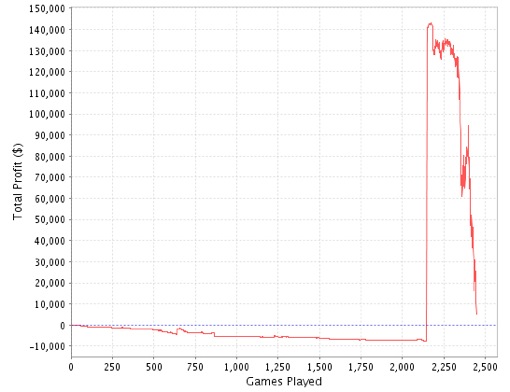 Russian online player I7AXA came in second in last weekend’s PokerStars Sunday Millions, banking just over $143,000. Some of us would pay off student loans with that $143,000. Others would cash some out and buy a car. Some people would maybe help a family member out. Others would buy frog legs. Lots and lots of frog legs (got to get in all the French jokes we can on the slim chance that Groupe Bernard Tapie actually does buy Full Tilt Poker).

However, others would immediately blow it all playing heads-up sit-no-goes all night long.

Which is exactly what I7AXA did.

First, I7AXA began playing $5,000 SNGs. After treading water at first, the bottom fell out. Literally. Not too long after banking $143k, I7AXA was playing $30 SNGs, then $7, then playing with his Frequent Player Points.

By the end of the evening, there was basically nothing left. At all.

Follow the downswing (as others followed it) here. Read I7AXA’s Google-translated take on the dive here.

* Tip of the cap to Poker News for bringing the story to our attention.