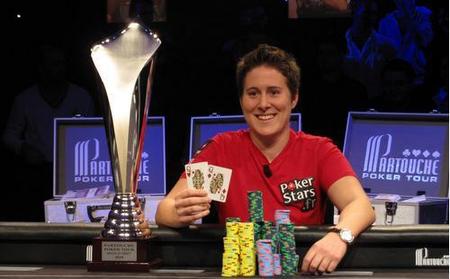 Winning a major title with two ladies is what we'd call "destiny."

Over the years, we’ve tried to take a bigger look at poker than just the numbers. We’re big picture, landscape guys.

In evaluating who our Player of the Year was going to be, we were looking for a combo of things: overall results, overall impact (or potential impact) on the game, sponsorship appeal, and the amorphous “more.”

So while Tom Marchese (Card Player) and Sorel Mizzi (Bluff) are certainly worthy of their respective Player of the Year honors, neither of them cut it as our pick.

For us, it really came down to two players: Vanessa Selbst, a woman who likes women, and the man the myth the legend, Big Sldick, Black Phil Ivey, Dwyte Pilgrim.

Pilgrim grinded out 20 (20!) cashes (mostly in smaller buy-in events) and six (6!) victories (including his epic WPT Borgata Poker Open score of $733k). In doing so, Pilgrim added some much needed personality to a game that is being overrun by online math geeks. He’s one of the few guys on the circuit we can actually see have serious cross-over appeal. Also, he’s black. Where Phil Ivey is just at another level (i.e. the pinnacle), Pilgrim is more relatable to the masses, and *could* eventually help introduce the game to an underrepresented segment of the population (especially if ESPN had actually given him some decent screentime during the WSOP Main Event this year, but that’s another story).

However, despite all of this, Pilgrim doesn’t take our top honor.

That leaves us with Vanessa Selbst.

Believe it or not, we think Selbst represents a lot of what’s good about poker. She’s ridiculously talented. She’s handling poker the right way–instead of dropping out of school to chase the dragon, she went back to school to get a law degree (from Yale, no less). She’s outspoken and witty. She likes chicks. She won two major titles in 2010. In limited action, she banked more money on the circuit this year than any non-November-Niner ($2.8M). She also landed a sponsorship deal with PokerStars, becoming a Team Pro.

For us, this was the clincher. With Stars behind her, she can be marketed to the most underrepresented demo in the poker community: women.

In a sense, if handled properly, she could be our Billy Jean King. Or Nancy Lopez. Or Ellen.