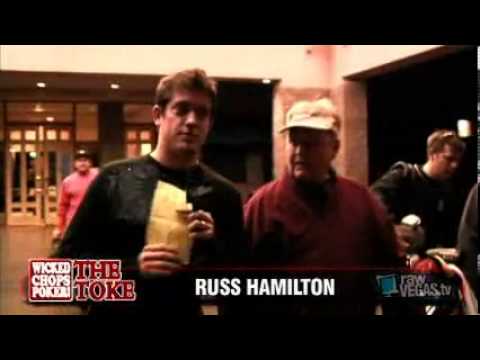 Layne! Layne! Where you going!

Ok, let’s wrap this why-the-hell-are-we-celebrating-nine-years-nine-year-anniversary thing, with Part II of our Top 9 Favorite Poker Industry Memories. If you missed it, read Part I here.

5. 2006 WSOP Jamie Gold Fiasco—The 2006 WSOP was the peak of the poker bubble. That Main Event was bonkers. WCP was really coming into its own then. We had a perfect storm brewing—we were just doing real industry business, had a site that out of nowhere got popular, and we were just in the middle of “stuff.” And so much of what WCP became was rooted in the whole Jamie Gold final table fiasco.

That Gold final table and eventual Leyser lawsuit taught us how to walk a fine line between our business and media interests. It’s nuts to think that while Brian and Colin were handling PR for Bodog , Chops (and Colin) got to constantly rip Bodog’s main sponsored pro, Jamie Gold (and his personal PR team), on a daily basis on WCP. Colin even wrote that Gold’s PR team was “monkey fucking a football” because they were mishandling his situation so much.

But back to that Main Event. Many view Gold as a luckbox, but we still believe nobody controlled and dominated a Main Event the way he did in the modern poker era. Gold ended multiple days as the big stack, never relinquishing his lead. He made the most of his persona to coax people into calls and folds. It was brilliant. It made awesome TV.

It also got to his head very, very fast. One memory sticks out, and it set the stage for something we witnessed a couple hundred dozen times in the proceeding years: [insert poker pro] gets alittlebitofexposure and thinks he/she is suddenly big time.

Seeing Jamie Gold walking down the hallway at the Rio during a break as chip leader with two—TWO–body guards surrounding him and no one having a clue as to who he was—that stood out to me. He and his entourage walked by Greg Raymer and “Salty” JoeHachem, the past two champs and great ambassadors, in the hallway as they signed autographs—without bodyguards. It was a hilarious and ridiculous and a moment I’ll never forget.

After ripping him on WCP almost daily for about six months, Gold reached out to me. He invited me to dinner at Rao’s in Caesars. It was a good bury the hatchet type meeting. He owned all the mistakes he had made. Seemed self-aware. He’s since done the number one thing to get on my good side—remembered my daughter’s name and asks how she’s doing. Jamie has definitely made a lot of mistakes in poker—but in an odd way he was also really good for poker. The game could’ve used more oversized personalities like Jamie Gold.

6. Ambushing Russ Hamilton—This was such a fun day. Chops and Bbals got a call from a mutual high-stakes poker playing friend that Russ Hamilton was at TPC Summerlin playing a round of golf. This was the first real confirmed sighting of Russ since the UB super-user story broke. We had a chance to ambush him and ask him the questions the poker community deserved to know.

Chops got two of his camera guys and called x107.5’s Dave Farra to do the interrogation. As Chops recalls:

The group of us sat in two cars in the parking lot at TPC for about an hour waiting for Russ’ group to wrap up.  We saw Hamilton finish his round and were like, “holy shit there’s Layne Flack too!” From a distance we could tell they were clearly paying each other and settling bets. We were set to pounce. Then they went inside to the bar. Assholes! It was getting dark. We were afraid the lighting wouldn’t work and we’d lose the whole opportunity if it got any darker. So to see what was up, I walked to the front entrance of TPC to peak in to see if there was any indication when they’d be on their way. As I walked up, boom, there they were, 10 feet away, walking towards me and out of TPC. I turned around and called Dave’s cell, “It’s on go go go go!” Dave and the camera guys got out of car and ambushed. Dave did an awesome job drilling Russ, and you could see Russ just seething with anger. The funniest part of the whole thing was watching Layne Flack’s reaction when the cameras showed up. Layne was trailing Russ by a few feet, saw the cameras and pulled an insta “Heavens to Murgatroid, exit stage right.”

We drove off not believing we just did that.

The NBC National Heads-Up was just a month later. Dave Farra worked the red carpet of the draw party. Every single pro playing in the event had seen his video. Some, like Annie Duke and Mike Matusow, couldn’t wait to talk to Dave about it. It resonated.

7. Poker2Nite and TWiP—Getting to write and produce the second season of Poker2Nite, followed by about a year’s worth of This Week in Poker, were creative highs for the Entities. Chops had some background in screenwriting and TV, but none of the Entities had as immersive of an experience as P2N. We’re proud of the writing, booking, and mainstreaming attempts of the show. That would’ve been a fun one to continue for another season, especially had they brought on a new Director (the one they hired was easily one of the biggest foaming at the mouth a-holes we worked with in the industry) and redesigned the set.

Instead, Brian and Colin formed a partnership with Jason Calacanis and his This Week In network to launch This Week in Poker. In a rare instance, Chops was kind of wrong about something, not thinking he’d initially enjoy the experience. But the show was a lot of fun. We really enjoyed working together on it. Damn you Black Friday for crushing any shot at getting sponsors and continuing it.

About 10 minutes later a release dropped stating that Federated Sports+Gaming had filed bankruptcy the day before. If we had won the lottery that day, it would’ve been less exhilarating than that news.

The thing about FS+G and Epic that was amazing was that EVERYONE really deep in the industry did not want to see this thing succeed. It wasn’t rooted in jealousy either. Pollack, Annie, and all of those guys were such condescending, we’re-smarter-than-you, “go big or go home” pretend executives that they rubbed everyone the wrong way. Hard to root for those types of people.

Last month we wrote how if nothing else, Epic was great in that it provided a bridge of employment for some deserving poker media members right after Black Friday—a time the industry was still sorting itself out. Aside from that, Epic basically screwed everyone and everything else they touched. They were the anti-Midas, and none of the key people involved are even close to the industry any more. It all worked out in the end.

It was a stroke of good fortune that the three of us were all together in the same city that day.FS+G cost us a lot of time and money. We got to see it fold together. Industry execs and players called throughout the day to discuss. It was like we won or war or something.

9. Black Friday—This is an odd one to list as a favorite, as it was one of the worst days of our adult lives—but it also showed how we were a tight knit poker community. We wrote an oral history of Black Friday that gets into the details of the day (still a fun read, go here), but what stood out most about the day was how much a lot of us had each other’s backs.

And that’s that. There are a ton of other memories that stick out in a good way. Random things, like watching the Mavs beat the Heat in Game 6 with Lance Bradley; the time Brian walked out the Rio late at night during the WSOP to see two randoms having sex in a car in the parking lot; the HPT party at the Palms after Epic’s bankruptcy; going to Phil Gordon’s WSOP party and podcasting with Andrew Feldman; Erick Lindgren’s golf prop bet; way too many to list.

Also, a big thanks to all the sites that supported us through the years: BLUFF, Pauly, PokerListings, Part-time Poker, WWTDD, QuadJacks, F5, 2+2, Pokerati, Busted Coverage, Poker-Red, ekstrabladet.dk, With Leather, and on and on.