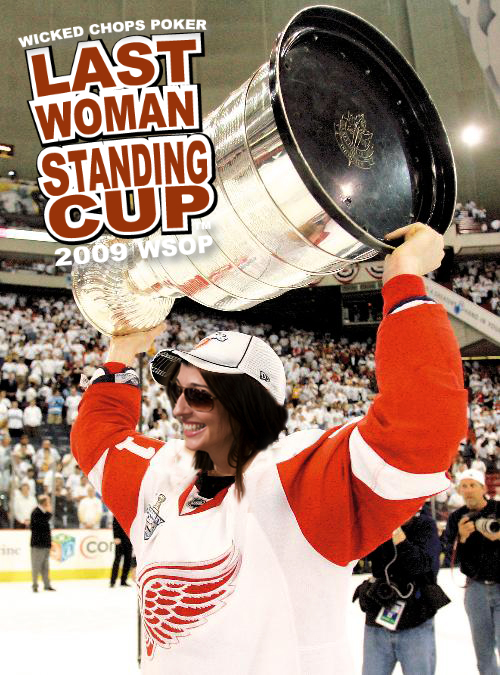 The Last Woman Standing Cup is just like the Stanley Cup. Almost exactly. But more prestigious.

We’re not saying the World Series of Poker is sexist, but it’s highly suspect that in 39 years there hasn’t been a female champion.

In fact, since its inception in 1970, the World Series of Poker Main Event has had few if any women seriously challenge for the Main Event bracelet. Only a few have come even close. Barbara Enright, a woman, made the final table in 1995 to finish fifth. Annie Duke, a woman, fell one spot shy of the final table in 2000 to finish 10th overall–while 8 months pregnant, no less. Tiffany “Crazy Bitch” Williamson, a woman, crazy bitched her way to 15th place in 2005. And just last year, Tiffany Michelle, a woman, had the highest percentage placement of a woman vs. the field when she finished 17th.

While none of these women eventually won The Big OneTM, they did earn the equi-prestigious title of The Last Woman StandingTM at the WSOP Main Event. In fact, it’s become the crowning achievement in all of poker for women. Each year, as the Main Event field dwindles down, there is a focus on female poker players by the so-called “media” as everyone wants to know who that Last Woman Standing will be. It’s a big deal. Like winning the Kentucky Derby if you’re a horse. Or the Westminster Dog Show if you’re a dog.

However, what has the Last Woman Standing received in the past? A little bit of ESPN air-time, sure, but that’s about it. No bracelet, no plaque, no nothing. Zilch.

That, however, is about to change. This year, the Entities who comprise Wicked Chops Poker will award the first ever Last Woman Standing Cup.

We’re working on some other cool things to present with “The Cup,” along with a special dinner with the Entities. More details to come, but look for additional coverage of all the women in contention for the Last Woman Standing Cup over the next few days.

After the jump, a list of all previous Last Women Standing in the WSOP ME. Note that to qualify for LWS, said woman needed to cash in the ME.