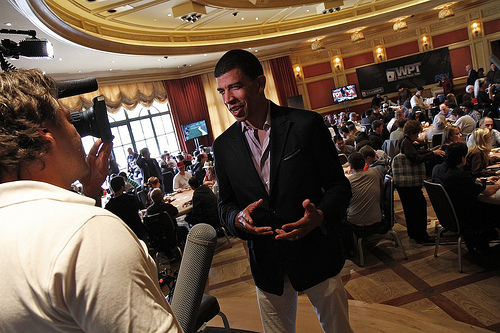 Continuing his jubilant press rounds of the past two weeks, President Barack Obama stopped by the Fontana Room to discuss how we killed Osama bin Laden.

While there was plenty of speculation, but nobody really knew how The Events of 4/15TM would impact domestic tournaments in the New World Poker OrderTM.

The World Poker Tour has held two events in the States since Black FridayTM. Both have, in our opinion, exceeded participant expectation.

With registration still open, the 2011 WPT Championship has brought in a field of 188. Last year brought in 195, which was the lowest total starting field since Season 1 (in the WPT’s defense, it was running against the EPT San Remo). So, with satellites still running and a few pros who always register late for the event, it looks like this year’s Championship may actually exceed last year’s total. Impressive if so.

For those wondering if Team Full Tilt would show up at the event, some did. We set the line at 6.5 of the 14 team members to play. So far, 4 have entered (Juanda, Lindgren, Matusow, and Seidel). If Howard Lederer does play, Change100 has offered to eat her flip flops, a promise we’re going to hold her to and film.

And now on to the actual tournament. Christian Harder ended Day 1 as big stack with 249,975. He’s followed by the still tournament-hot Ali Eslami with 240,475.

In sixth overall is the newly-minted-free-agent Doyle Brunson with 230,000.

A total of 182 of the starting 188 still remain. Get full chip counts here.