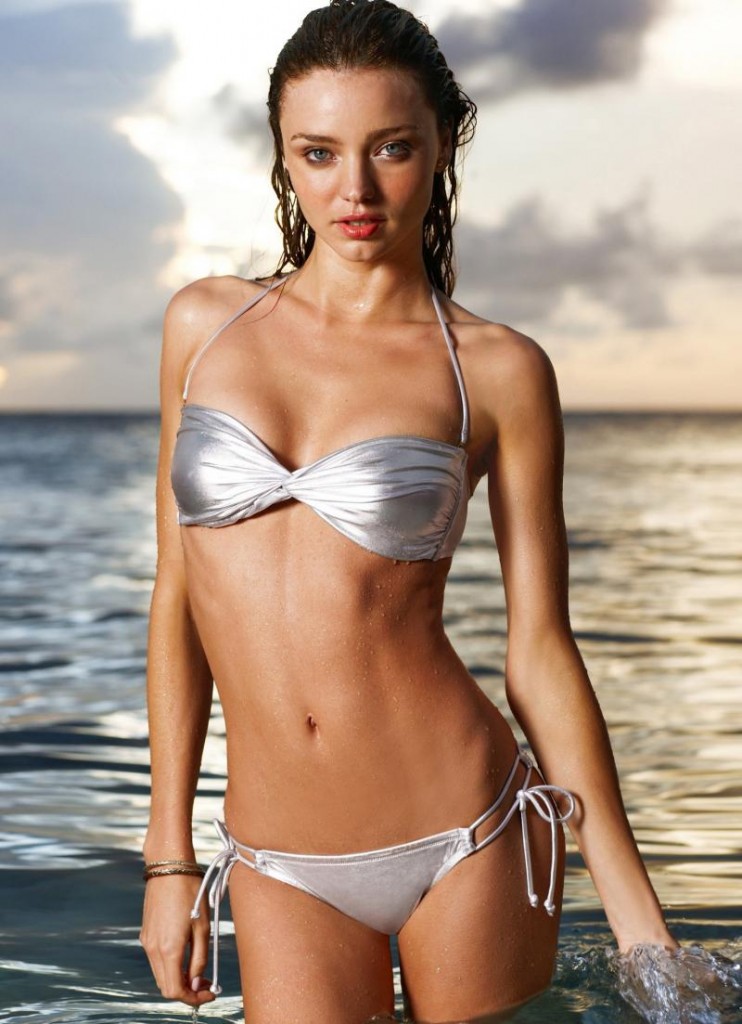 WSOP Europe is moving to Cannes, where hot super models like Miranda Kerr (above) are treize à la douzaine, whatever that means‎.

The series, which has the WSOP teaming up with Lucien Barrière Hôtels & Casinos and BarrierePoker.fr, will run from October 7 to 21 this fall, and be held at the salons inside the [copy & paste] Casino Barrière de Cannes Croisette and the Hôtel Majestic Barrière, right off the beach where actresses, glam models and prostitutes/playmates crawl around in bikinis like this and this on yachts.

This is a smart move for Caesars and the WSOP Europe in that the new footprint offers more than twice the number of tables than London did, thus able to handle much bigger fields, and well, it’s in Cannes, so way nicer tournament set-up and locale.  Since its start in 2007, the WSOP Europe has been held in less than optimal conditions in London, with players crammed in small tournament areas surrounded by noisy slot machines. The biggest field London ever saw for a Main Event was 362.

Stay tuned here for more of our thoughts on the WSOP’s move to Cannes and what this means for poker in Europe and France specifically. For now, read Caesars’ official press release here.

Lucien Barrière Hôtels & Casinos and BarrierePoker.fr become the official French sponsors and hosts of the World Series Of Poker® Europe

Branded tournaments on BarrierePoker.fr, real money poker on WSOP. fr, and WSOP Europe in Cannes all part of deal

Caesars Interactive Entertainment, Inc. (CIE), a subsidiary of Caesars Entertainment Corporation, is bringing the World Series of Poker – the world’s longest-running and richest poker brand – to France by aligning with Lucien Barrière Hôtels & Casinos and BarrierePoker.fr for both land-based and online poker events throughout the country.

Since its first annual event in 1970 in Las Vegas, the WSOP® in Las Vegas has consistently increased participation and now boasts more than 70,000 annual entrants. This ultimate world poker event attracts both professionals and amateurs from more than 115 countries.

Mitch Garber, CIE’s chief executive officer, comments: “This is a unique agreement between two casino leaders with great brands. Lucien Barrière Hôtels & Casinos is a well-run organization and we are excited to work with them to access the French market with high-quality and reputable poker events both in their hotels and casinos, and online with BarrierePoker.fr.”

“This alliance backs our powerful synergy strategy between offline and online gaming, and it is an honour to associate ourselves with the most prestigious poker tournament in the world,” states Dominique Desseigne, Groupe Lucien Barrière’s chief executive officer.

The Barrière Poker Tour 2011 will start in April in several casinos of Group Lucien Barrière. Seven locations (Toulouse, Nice, Lille, Dinard, Enghien, Trouville and Bordeaux) will be hosting the tournaments culminating with the WSOPE® Presented by BarierePoker.fr in October, 2011 in Cannes. Both professional and amateur competitors alike will have a unique opportunity to take part in this new challenge that the Lucien Barrière Hôtels & Casinos, BarrierePoker.fr and WSOP® represents.

Eric Cavillon, Operations Director in charge of poker development at Lucien Barrière Hôtels & Casinos, explains: “The Lucien Barriere Hôtels & Casinos, BarrierePoker.fr and WSOP® alliance allows us to put on an outstanding tournament hosted by a world famous brand in France while positioning us to become a leading operator of both online and live poker.”

The Barrière Poker Tour 2011 stops will serve as qualifying rounds for an eagerly anticipated event, as World Series of Poker Europe (WSOPE) Presented by BarrierePoker.fr will be held for the first time in Cannes from October 7-21, 2011.  The event, since its inception in 2007 had been held at Caesars-owned casinos in London. Players will be welcomed into the outstanding and unique settings of the Casino Barrière de Cannes Croisette and the Hôtel Majestic Barrière for this prestigious set of poker tournaments.

The new facilities allow the WSOPE to greatly expand its offering, as organizers plan for 75 concurrent poker tables, double the capacity of 2010.

The World Series of Poker Europe Presented by BarrierePoker.fr will offer seven WSOP® gold bracelets in 2011, globally recognized as the highest achievement in poker.  Thanks to the Caesars and the Lucien Barrière Hôtels & Casinos agreement, the WSOP® bracelets will be offered for the first time outside of Las Vegas and of a Caesars casino.

The complementary nature of the BarrierePoker.fr online poker offering

BarrierePoker.fr, the online poker website born out of the alliance between Groupe Lucien Barrière and La Française des Jeux, will start this month integrating the WSOP® into its offerings.

CIE has been looking for a strategic opportunity to enter the French market after seeing for years the interest of French poker players at the WSOP® event in Las Vegas increase.  By signing an offline and online alliance with the same group, Caesars now has the ability to tap into this terrific market in a meaningful manner.

BarrierePoker.fr has been chosen as exclusive operator in France of the online official qualifying rounds for the Barrière Poker Tour 2011, WSOP® Europe and WSOP® Las Vegas. The website will also plunge players into tournament action via regular coverage of all the events.

As part of this agreement, a new WSOP.fr site will be created. The website will present all of the latest WSOP® news and information in French for the first time and will rapidly evolve to offer new services. CIE and Barrierepoker.fr will design the new WSOP.fr website and it is expected to debut later this year.

“Backed by this alliance, we will be even better equipped to let online players access the most prestigious world poker events in casinos and to benefit from special, unique operations in conjunction with WSOP® events,” concludes Jean-Etienne Bouedec, BarrierePoker.fr Deputy Chief Executive Officer.