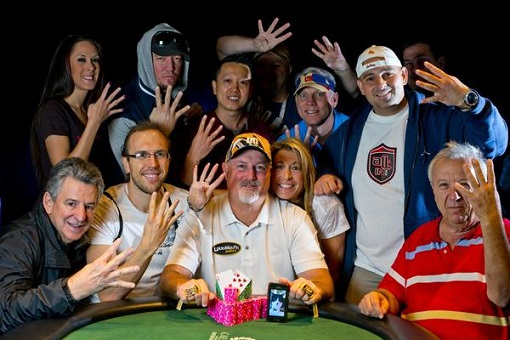 The Year of the Schneider is in full effect.

Tom Schneider = a mystery wrapped up in an enigma.

He’s the most anonymous WSOP Player of the Year ever…yet has results any top pro would envy.

His name is Tom Schneider and he looks like a Tom Schneider. Yet he’s got a cool nickname (Donkey Bomber). He’s got an attractive MILFy wife who happens to be a solid player too. Doesn’t add up…unless he’s a potential Big Cock Poker sponsored pro, if you know what we mean.

He seems like the conservative guy next door. Yet he blogged for Pokerati and has a sponsorship deal with a clothing company. A clothing company that makes obnoxious clothing that even Jesper Parnevik wouldn’t touch.

Putting out the bat signal to Ol’ G Smith. Seems like this needs to be our next podcast.

Get full recap and results of Schneider’s impressive win here.